Surprisingly, I didn't feel at all disappointed by the ending. I mean it's such an absurd series of events that of course she was dreaming it all up! I actually had no clue as to how the story would end in just ten more pages since at the point I was at, she was still in the trial, quarrelling with the King and Queen. I think that it does however make a lot of sense because dreams typically do end abruptly.

Though obviously, the adventure Alice goes on is the most interesting bit as it is just filled to the brim with nonsense!:

"The long grass rustled at her feet as the White Rabbit hurried by—the frightened Mouse splashed his way through the neighbouring pool—she could hear the rattle of the teacups as the March Hare and his friends shared their never-ending meal, and the shrill voice of the Queen ordering off her unfortunate guests to execution—once more the pig-baby was sneezing on the Duchess's knee, while plates and dishes crashed around it—once more the shriek of the Gryphon, the squeaking of the Lizard's slate-pencil, and the choking of the suppressed guinea-pigs, filled the air, mixed up with the distant sobs of the miserable Mock Turtle."﻿﻿﻿﻿﻿﻿﻿﻿﻿﻿﻿﻿﻿﻿﻿﻿﻿﻿﻿﻿﻿

Hold on, I haven't even talked about the fact that I literally just typed out a whole book! I used a site called TypeLit.io to do this, and it's just an awesome project that one person's working on. It's pretty new and it's constantly getting new books and new updates/improvements—the latest one being dark mode which I super duper appreciate.

I typed Alice in Wonderland over the course of about 2 weeks, and my average typing speed by the end of it was 80 wpm (as you can see in the picture). However, when I used to go on the typing website, KeyHero, my wpm was actually above 90 wpm. I guess the reason for there being a decrease in speed is because I'm not used to typing quotation marks and the Enter key a lot.

Anyways, go check out it out if you want to improve your typing speed and be entertained at the same time. I myself might read Dante Alighieri's The Divine Comedy next. 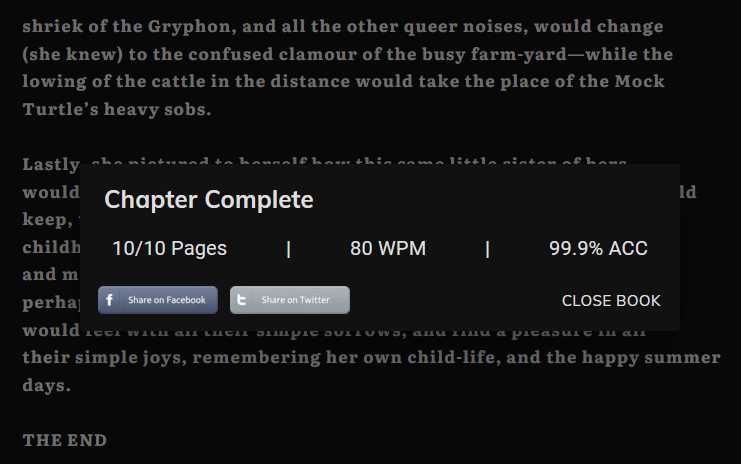