07:14: got my period over night. After I had gone to the bathroom i went back to sleep and dreamed Something strange. Like, i was from the future so i knew what songs the church will play in the future. And Technik and all. I thought of the first time i did that and it was all confusing. Even if It's actually easy, one task e.g. was distributing candles in the room. The trchnik itself was interesting. Different. And i think Christoph heard me talling to a stranger telling that one i was from the future. Then just strange, more unrealistisch stuff happened.

09>09: Today is a typical period day. I don't want to do anything and feel unwell. I need to do VWL but then sit on my bed and do nothing or am on my phone. I went to my desk and did a Duolingo lesson but still feel bad. But I can't procastinate, or else I need to do it later. And then we'll have other stuff...

I had to force myself to do VWL as I felt somehow awful and sometimes ended up looking around for a few minutes. There I noticed that Laura (Kaffeebar) is on the CrossoverGraduation2016. I didn't even know her back then. At 14:30 I went to church nearby to record. Holding distance is so hard. Sure, big room, but you have some technical stuff. It was like a mini studio, and an interesting experience. Playing a song in an endless row (except the last 7 times), just two bars between end and beginning. At first I found it hard to find the right spot where I needed to begin. But for the next songs I got it right for the most. Sometimes I knew it begun but maybe I was too focused that I didn't breathe. But all in all it was fun. Next time I shall not forget to bring along water. After the first song I shorty went down to get water. As the door was locked I needed keys. I didn't think and when I was in the kitchen I laid them down like that. When I wanted to leave again I noticed, oh I need to lock the door, what is the right key? But I didn't mixed them, so there was a high chance of it being the one key there that wasn't too close to the others. Luckily it was, as they all looked very similiar, at first sight at least. It was around 2h we recorded, "Alle Ehre", "How great thou art", "Das ist mein König" and "Dankbarkeit". For the last one I wasn't sure if it wasn't too fast, but it was okay, and it's a good chance that there are all parts played correctly at least once in the nine recordings.

When we came to the second song and I played, I heard the flute so quiet and a bit "dumpf". After that he noticed he forgot to turn something on and wondered why the track was empty. I thought it was me... As, (nearly) everything that would go wrong was me. I mean, I'm not a pro and have a lot to practice. I hope that, one day, I won't make that many mistakes but most of all that the sound produced is more perfect. Not that it's bad at the beginning or the end and suddenly there is a high, short sound which doesn't belong there. Now I'm exited for the results.

I went home and everyone was outside. The neighbor and his wife, mom, my little brother, my sister and Kitzel. They were planting.

So I went up, laid my stuff down and picked up the three flower pots. I put the yellow, middle sized one in the big and then on it the small pumpkin pot. But I had to go two times back later. In the pumpkin pot I put one seed of Cosmos, the flower that was in there, that doesn't have petals and I hope they'll bloom again, I put that one into the yellow middle sized one and into the big one I put a lot of earth and then a lot of Cosmos seeds. I hope they'll grow strong. They're for outdoors, but maybe they can grow here as well. I have no idea about gardening. Actually, I have no real idea about anything. I maybe know some stuff but none good enough that I'd say I know it.

Now I'm glad to get some rest. I need to practice my presentation for tomorrow....

Maybe God will help me.

I somehow love this sentence, since I read that book. Jonathan didn't say "Maybe God won't help us".

20:00: i needed to cut down my Presentation. It has so less Information but still was too long... 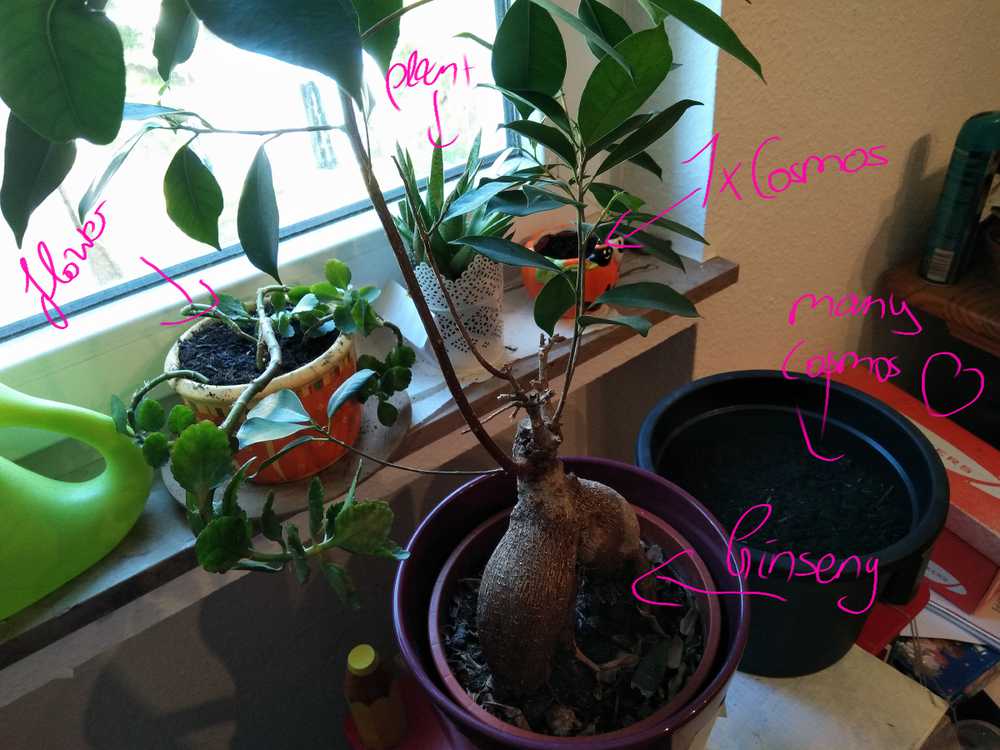