the main tank is kind of jank

So, as I mentioned, Kan was MIA for raid last Sunday. No explanation, nothing. He was offline during our usual raid time, which is extremely unusual; that guy's dot never goes dark.

In scum chat, HGR said: "My pet theory is that Kan found a more hardcore static and doesn't want to break the news. This is the guy who faked a power outage to avoid talking to Chris."

(Flashback: In Mercs 3, I was in a hotly contested match against Chris. Kan voted for me, which sent Chris screaming fire in his face. To mollify him, Kan promised to switch his vote, then faked a power outage for the remainder of the match until the voting deadline had passed. I won by Kan's vote. Chris redirected his fire to me, but the future refused to change.)

Dante said, "It's either that or he's making too much money/gil selling clears. I don't think he realizes we don't really care if he moves on, life happens. And it's kinda a great place for him to move on if he wants to."

numbers said, "The reason I sent out the call so early was so I could tomorrow or so justifiably pm him and be like 'Hey, what's up?' Hoping he'll talk 1v1."

But things turned out fine in the end. On Thursday, numbers reported back: "Kan says last week was just crazy for him and has confirmed for this week." And indeed, eight green check marks in Discord. It's still kinda weird—he's usually very prompt about confirming, you doing okay dude?—but I guess even if something is up, he doesn't want to talk about it.

Anyway, at long last, it's the fabled RAID DAY, featuring Emperor Varis yae Galvus in Memoria Misera EX. (By common agreement we're tabling Shinryu for now. numbers said he forgot we were even in the middle of fighting Shinryu.) Since I haven't been on for three weeks, I had a brief moment of "oh geez what even is a rotation" but I quickly got into the flow of things.

It was a good raid session. Varis is a cool boss, even though it took me nearly the whole session to start getting the hang of all his moves. Highlight of the session: Kan tried explaining Fortius and, as usual, his explanation was opaque. So we went to aggie.io for Kan to draw us a diagram, which was also opaque. But we all had fun drawing. numbers was constantly drawing dicks over everything and also constantly accusing everyone else of drawing the dicks. Finally we told him "you're really good at drawing dicks" and he said "yeah, I went to high school."

(Fortius starts out just like Doomvoid Cleaver, with wedge-shaped AOEs targeted at every member of the party. But then Varis rotates and continues firing off cleavers in the same pattern relative to his orientation. To deal with this, we use a modified clock position strat, standing close to cardinals so as to leave large gaps along the diagonals [see diagram]. We then stay in the gaps while he rotates. Kan is my cardinal buddy, which is super convenient because I can just move where he does.)

We got reasonably far, and probably would've cleared if Silver hadn't needed to leave early. Wonder what we're doing next: back to Shinryu, or forward to Ramuh? My vote would be for Ramuh. This EX interlude has been fun, but I'm hyped to start Eden's Verse Savage. 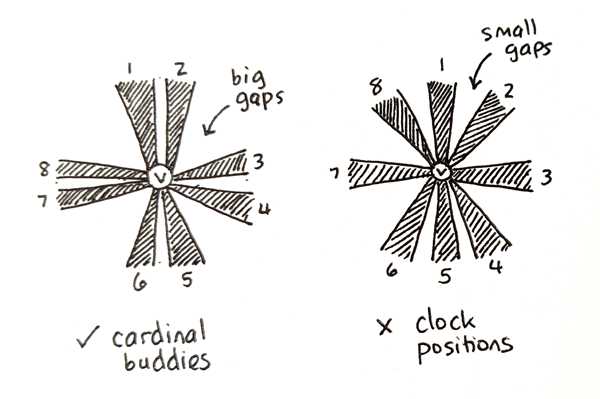