I fell asleep last night at around 1 AM and I woke up this morning at around 7 AM, so I got around 6 hours of sleep. Despite that I didn't really feel tired or anything, my normal sleep amount is around 4-6 hours a night, and that's because I sleep so late and I get woken up by others in the household. Usually by 6 AM other people in the household wake up and they start playing the news or music very loudly, and due to that I get woken up every morning. Yesterday I got 8 hours of sleep, and that was because I fell asleep at 11 PM and woke up at 7 AM. I usually never sleep before 12, but that's changing today.

Yesterday despite getting a really good amount of sleep and having the entire day off work, I wasted it. I wrote about all the activities I did that day in a long private entry, since a lot of the things I did shouldn't be public, but needless to say I was really disappointed with what I did. There was so much time wasted on entertainment that I didn't get to study or practice anything.

I didn't really do much this morning just watched some random videos or shows, and ate breakfast. After that I worked on some tasks that morning, got some minor items done. I only got minor work done because I tried multi-tasking working on a task while listening and/or watching something else at the same time. It doesn't make sense to work that way.

Regarding the waste of time activities I did yesterday, I know didn't want a repeat of that today. Somehow, even though I didn't explicitly look up information online that would help me spend my time better, I stumbled across that information anyway. It was the exact information I was looking for too, nothing was more perfect than this. I just took a series of unexpected and abnormal steps that I normally would never take, and that eventually got me to the information I was looking for, even though I wasn't looking for it. It's weird how it worked out that way.

The idea was to just remove all entertainment altogether. It sounds impossible but it made a lot of sense. I didn't look for that information, it found me.

At around noon I went out for a drive. I wanted to go to the rich neighborhood again and walk around. However I was feeling very exploratory today, and it was noon, which was a pretty early part of the day and I felt like I had so much time available, so I just drove around for over two hours and also refilled my gas. I drove for a long time because I went into several areas I had never been to before and got, lost but eventually made it to the rich neighborhood. I parked and I started my walk.

It was really hot and sunny outside. When I got out of the car and felt the heat, I thought about how global warming was another problem that could be massively mitigated if we just stopped unnecessarily killing animals, since animal agriculture and transportation are about equal in their greenhouse gas emissions, though arguably animal agriculture is far more harmful since entire habitats are destroyed for it and animals die needlessly.

Anyway I walked around for a bit and as soon as I got into the road area where barely any cars go by, and where the sidewalks are deserted, I took off my shirt. I have really tan arms, legs, head, and neck, but I'm pretty pale underneath my shirt. I figured I might as well even up the tan while I'm walking. The air and sunlight heat combination felt pretty nice.

This place was so deserted that there's only one car every 5 minutes, and not many people walk on this sidewalk. It takes about an hour to go from one side to the other, but I've only ever encountered people on the sidewalk after 70% of the way through. So I was pretty confident that there would be barely any cars, and there would be no one else on the sidewalk that I encounter. I was right.

I ended up going back after walking for just around 20 minutes, so in total I was only walking outside for about 40 minutes. I guess that's a decent amount of time, but normally I'd doing two hours or more if I just walked the entire path and turned around at the end. As I'm writing this now, I don't know why I turned around so quickly. I could have easily kept going, but I think at the time it just felt so hot out that I didn't want to stay outside any longer.

During my entire walk I just contemplated getting rid of all entertainment. It was going to be hard, but it was a challenge I was going to accept.

When I got home I don't really know why I did this, but I just gave myself a trim, a small buzzcut. I still had a bunch of hair at this point, just shorter. I still had my mustache too. But it made me wonder what I would look like if I shaved everything off completely. It's something I have never done since ever, so I wanted to give it a shot. During this pandemic anyway I'm unlikely to show myself at many places so I just went ahead and did it. I took off the trimmer guard or whatever it's called and left the trimmer at level 0 which is shaving level and I went all around my head.

My parents got home while I was shaving my head and they were shocked that I did this. I explained how I gave myself a trim initially and then just wanted to see what I would look like with everything shaved off. My dad helped me finish the rest.

Afterwards I cleaned up all the hair on the floor and took a shower. In the bathroom mirror I just looked like some hairless blob. I was some blobby blob blob. I seriously looked so different to before that I was pretty unrecognizable. Hair just greatly improves a person's appearance. It's not something I thought about much before, but now that I've shaved my head hair off, I can see how and why that's the case. I imagined what other people would look like without hair, attractive males and females, and they would also look not as good.

Looking at myself in the mirror made me want to lose weight even more, and with the new thing I'm doing with cutting off entertainment, it's going to happen so easily I think. I explained the only reason I ate so much in the private entry yesterday, but needless to say there shouldn't be any activities anymore that would make me eat so much. I still need to catch up the photos in my selfie logs and body pic logs, but yeah I just look like some blob without hair right now. I'm not happy with that.

Oh one weird thing about shaving my head off, is that I can feel a breeze on my head now. As I type this, I can feel cool air hitting the top and the back of my scalp. That is a sensation I never really felt before because hair was blocking it. One way to replicate this is to use one hand to wave air at your arm, and you should be able to feel the air hitting your arm. Now if you have hair, you can use the same waving motion to wave air into the top of your head, but you can't feel it because there's hair there. Since I recently shaved my head, the air hitting it actually feels cooler than the air on my arm.

After taking a shower I just immediately went to working on things. I studied a bit, learned some new things, and I faced some really hard problems I still don't know how to solve. I worked on stuff for like 4 hours since there was nothing else to do after cutting all entertainment off. Anyway I think it was approriate I shaved my hair off, I'm going to try to live the rest of my life without any entertainment.

I'm curious at how I'll do tomorrow. 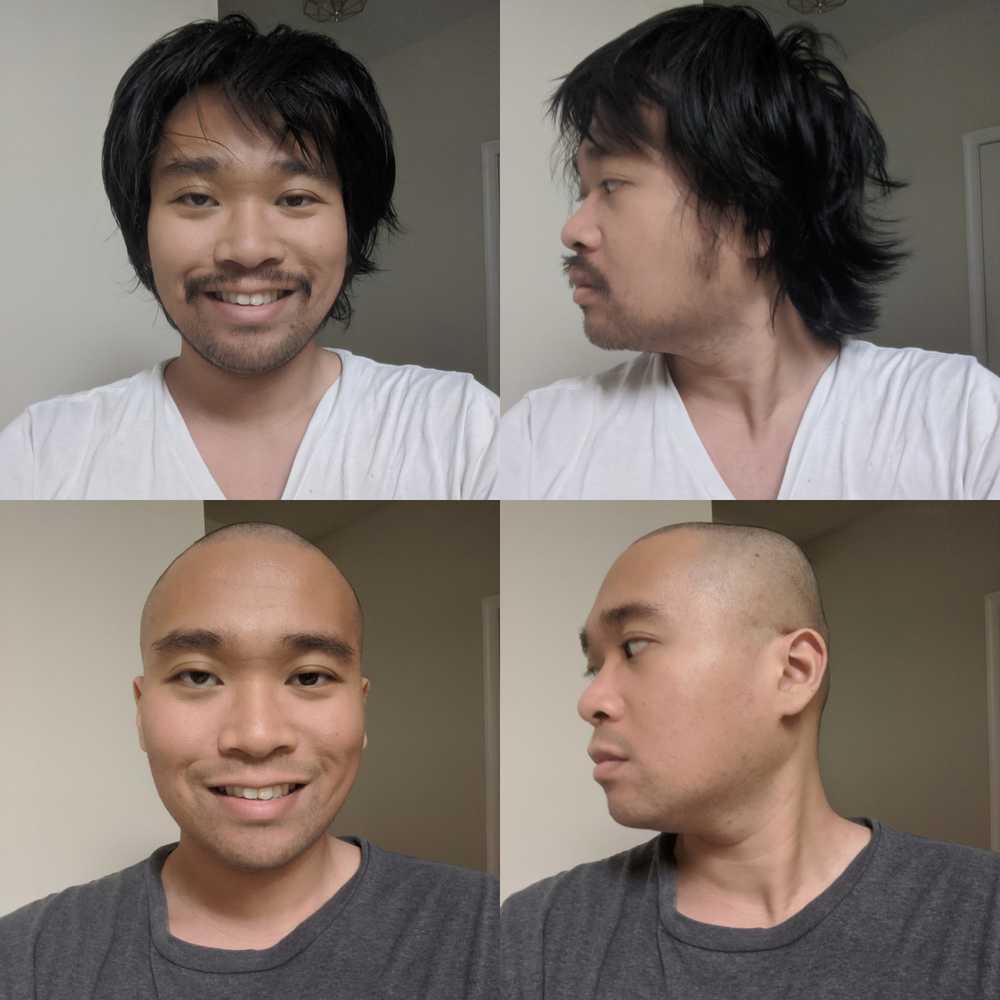 It does look good, and sometimes, you just need a change. I buzzed all my hair off in like 2014. I did the top with the longest guard on the clippers (1") then did the back and sides shorter. My husband hated it and didn't speak to me for days. I kept it like that for two years. I was just so sick of being hot and sweaty all the time when we didn't have air conditioning. I'm tempted to do it again because my hair is just really annoying me and takes too much energy to take care of at shoulder-length.
My daughter (20) also buzzed all of her hair off when lockdown first started but went down to 1/4" which was a bit drastic for a young woman, but she totally rocked it. She just needed a change at the time (before her hair was to her waist!).

@justanotherjen Thanks Jen! Great story that you shared, I don't know if I would recommend you doing it too but it's up to you. It is a "restart" for me and I've cut off more than just my hair, I've also cut off TV, videos, movies, and other entertainment. It will be interesting to see how I transform not only with my hair growing back, but also as a person due to these changes over time.