16:45: re-activated Habitica subscription. I have 3 month now and got a mystic hourglass and the gem cap got raised to 30 :D

Yay. I'm curious to see next bonuses. Ohhh I didn't open the new subscription gift. And I adopted the new ChickenSmoothie animals.

We needed to go shopping today. Before that my sister started to play MKT, so I did too. My "ohnehin" low Akku got even lower. But it survived the trip. I tried to find Shampoo for fatty/oily hair but Penny doesn't seem to have that. We met Mr. Kurz at Penny and he offered to drive us home. My sister didn't knew who he was, and I didn't really recognize him either, but I assumed it can only be him, I saw him a while ago. My sister didn't say it in front of him but she didn't want, I didn't really want either but found it rude to decline that offer, also that way we can be at home earlier.

When Mayimilian was awake I took a shower. It's still a mystery how people wash their hair 😦 When I was still there the others began to eat the leftovers of the lasagne. I joined later, but my hair wasn't washed good, even though I really tried. Mom washed it again, she asked me to do it, i wasn't sure but I accepted her offer. And it turns out how i have no idea about those products again, I was taking a "Spülung" previously (today I tried the Men's Sports shampoo, which is 3 in one, what's even the difference, isn't mens and womens hair the same?) and that that can't form foam. Now I want to look for a nice comb. I will use a normal brush anyway, but sometimes it could be nice using a comb, maybe in-between brushing hours... I'm thinking of one that looks liek sea shells... Where have I seen one like that? One that doesn't look quite ordinary, not an expensive one, just one that#s not really plain. I'll clean the bathroom floor tomorrow.

20:52: I worked so long on the project... after I finished editing the human, i added hair and that took the most time... it's just.. so complicatd and it doesn't display hair where i want it :/ now it looks like her hair was falling off on her upper part of the head... the rest is full and beautiful hair, but that part... i had it once perfect, but it was so much hair that the system got veeeerry slooow... i can#t work like that... yesterday i had tried that feature on the fox and got a ball of fur :D

21:42: I should go to bed soon, need to get up at 7 tomorrow. I submitted the pose-tsak and experimented with fur again, no luck.

23:07: There is a new challenge called "Bible reading: 1 chapter everyday - August Edition" . It's still on improvement, and tasks will maybe be added later, maybe the prize will be raised in future challenges. To create a guild costs 4Gems, which will be added to the guild bank. But to edit a challenge description costs 1 Gem each to avoid Spam. Need to think of that thoughtfully. 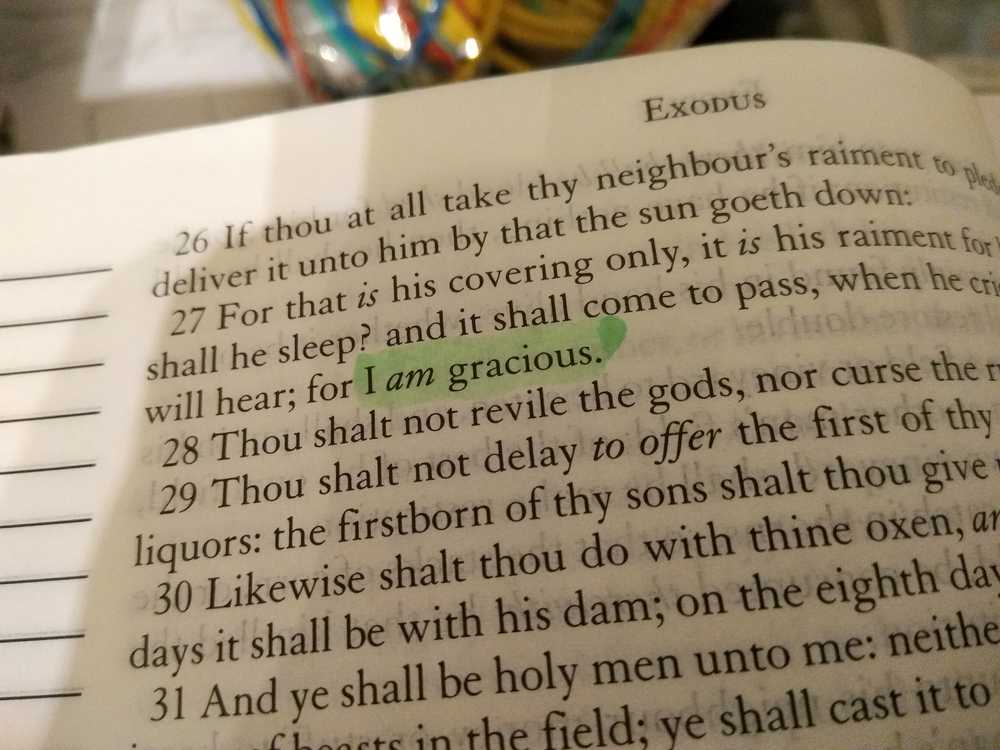 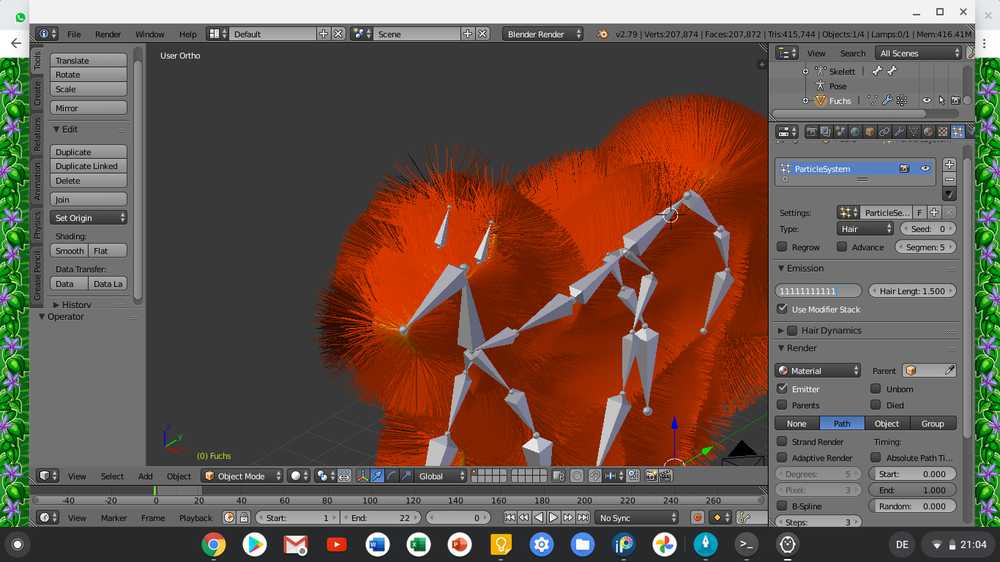 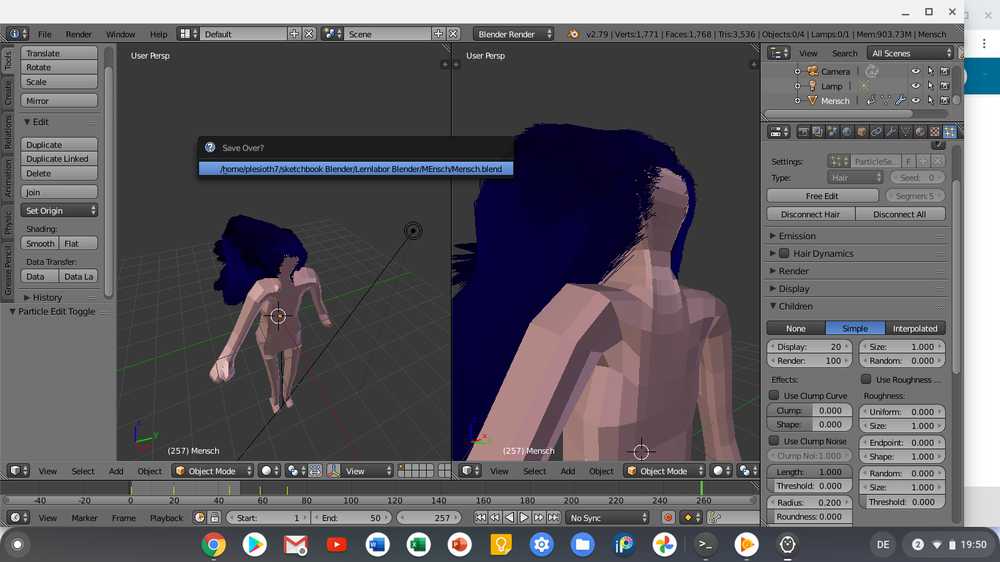 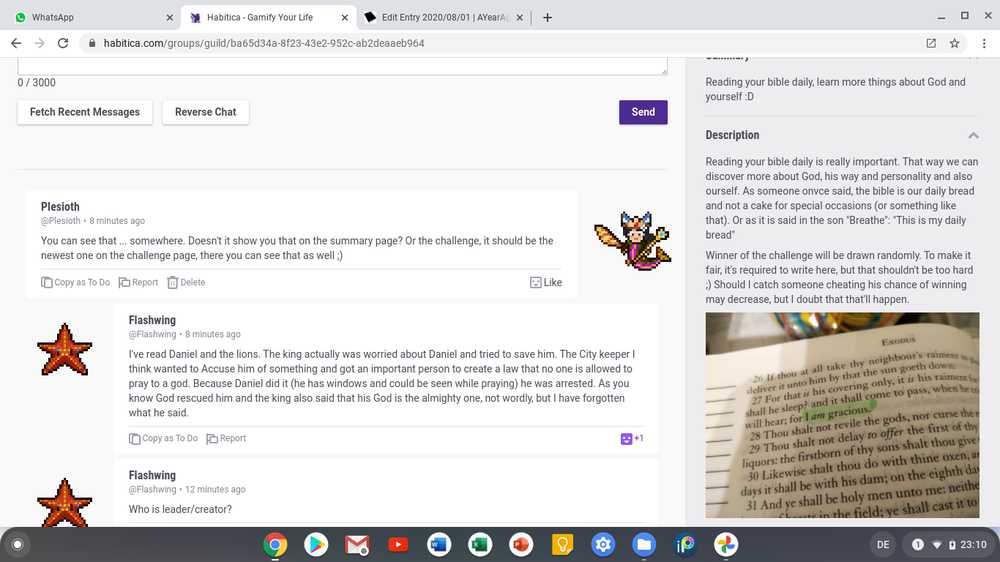