Artfight is over! Maybe. Probably. The site was down all morning while I was trying to post my last drawing, and lots of people were complaining, but Artfight staff refused to acknowledge the downtime let alone announce an extension, so I guess we're done.

After looking forward to Artfight all year, I didn't enjoy it as much as I hoped. I spent most of the month (1) frustrated that I couldn't decide what to draw; (2) frustrated that I wasn't drawing enough; and/or (3) frustrated by the quality of my art. It probably didn't help that I was very rusty, coming off a several-month-long drawing slump. I set a bunch of mini-challenges for myself (e.g., draw an outdoor scene in one-point perspective, design a book cover, create a dinosaur OC) and only completed about half of them. My pens decided that they hated drawing over a colored pencil undersketch, resulting in shaky, ugly lineart. (Note: I found a good workaround for this by the end of the month.  Tracing a detailed undersketch always causes problems.  But I can still use an undersketch to work out perspective and block out large shapes.  Then, for the rest, switch to pen.)

I also received less art than I expected.  Now, I've never cared that much about getting fanart; for me, Artfight is more like a month-long drawing prompt fest to create art and improve my skills, and any art I receive is a bonus.  But this year, I got so little that I began to wonder: Is my character roster so boring/bad that no one wants to draw them?

(As always, I am brimming with ideas to improve my character roster for next year.  More on that later.)

But there were good things too.  I was quite pleased with some of my pieces:

Next year I'm going to cut the mini-challenges and be more chill in general.  I chilled out for the last ten days of the contest (all of August, because that's bonus time) and ended up doing more art and liking it more too.  So my 2021 goal is not to stress over BIG ART PLANS.  Sometimes I feel like doing BIG ART; sometimes I want to just sit down and draw a happy potion shop succulent, or a shark driving a tank. 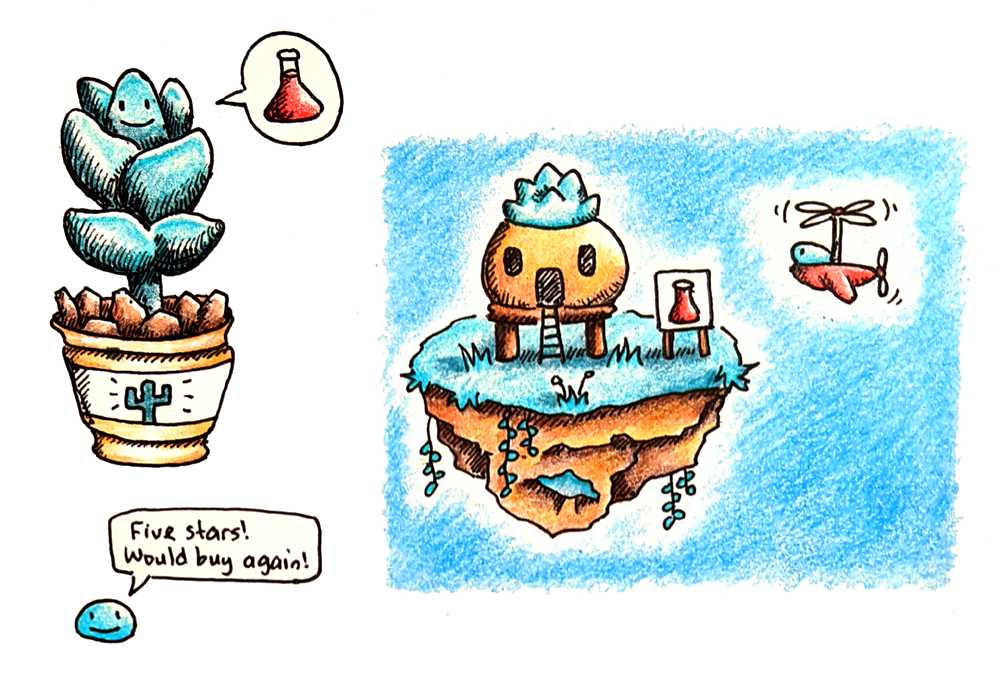 Since you improved this year compared to last year, it means you made progress in the right direction. That's great, it's better than staying the same or getting worse (if that's even posssible).

I'm actually not sure which body of work I like better; they both have their strong points. But I learned stuff about my own art style and technique, which is a plus. Also I can see I've clearly improved from 2 years ago in terms of backgrounds and scenes.