It's the yearly post-Artfight ritual: I pledge to draw more of my own OCs, both new and existing ones. It feels kinda bad that for one month I draw everyone else's characters, and then for the remaining 11 months I neglect my own characters.

For some reason, I find it easier to create characters for others than for myself. Every year I look for "Design me an OC!" posts, because making stuff up is fun. Last year's creations:

I also like finding characters with no backstory/personality and infusing them with story of my own choosing. Last year I found a white wolf named "?" (his creator hadn't come up with a name for him yet) and spun that into him being a monk, meditating in search of his True Name. This year, I decided the axolotl/cat was an activist in his younger days, then became a distinguished judge and finally a senior official in the axolotl government. (Not all of this shows in the pic, but that's why he has a gavel behind him. Also, he warns "no end in sight" because axolotls are out there protesting and he supports them; he's indicating they will not back down until their demands for justice are met.)

But making my own characters is more challenging. For instance, I want a wolf character, since wolves are my favorite animals; but my wolf should be serious and cool, and I haven't come up with anything satisfying.

Last inktober I went for an "OCtober" theme where I drew a new character each day, in hopes that some of them would stick. (One a day proved to be an unsustainable pace. I ended up with ten.) It was a fun project, but none of the characters were memorable/likable enough to make part of my character canon.

It's not like my character canon is deep or elaborate. Cy/Mini/RJ are all part of the same team, and Denali/Ian are best friends, but Otto and the traffic wyrm are just winging it out there. And I wouldn't mind having other solo characters. I'm not going to make a novel or comic or game involving any of them, I just like having them hang out in my head. 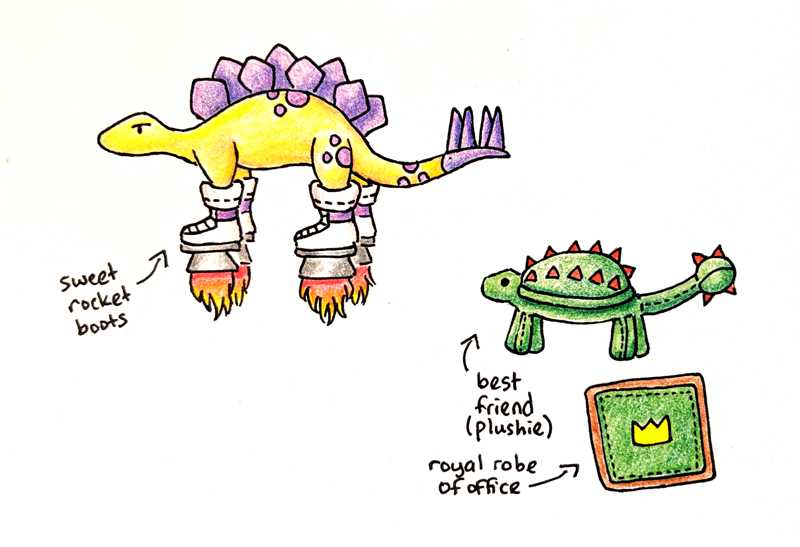 @JustMegawatt That makes sense. I read pretty widely (mostly fantasy, sci-fi, and other speculative fiction, but also other genres). At the moment I'm more interested in OC design from a visual perspective. Twitter helps with that - I follow a lot of more accomplished artists to study their work - although it's a mixed blessing, I often spend hours on there and do nothing of my own. Gotta balance!