Last week, I was hoping we'd hit enrage on Ifrit. Instead, we didn't even get past Ramuh. Kan had a power flicker during an early Ramuh run, and then he kept disconnecting during later runs, usually shortly before Fury's Fourteen. Finally we decided it was a lost cause and adjourned.

"The static is dead!" said HGR. "We're never going to beat Ifrit! He was our first boss and our last boss!"

This week, we didn't raid for a variety of reasons: Kan still hasn't fixed his computer (he initially thought it was a driver issue, but after updating everything, the problem persists). Silver is busy with finals. newbie's computer keeps overheating. And I'm still getting frequent internet outages. I have internet maybe half the day, maybe less. Comcast has no ETA on when things will be back to normal. newbie consulted an outage map and found the whole area where I live is screwed up.

So instead, I played Terraria all day. It feels good to get immersed in a game instead of listlessly browsing the internet and autoing TAC. I'm still earlygame; I've beaten the Eye and the Eater of Worlds, haven't yet beaten Skeletron. But that's my style. I ramble around, I explore cave systems, I spend lots of time building houses for everyone. I'm the opposite of HGR, who is super goal-oriented. To him, Terraria is all about boss fights and progression. A few years ago we played co-op, and we balanced each other out: I'd putter around town, making new houses or whatever, and HGR would drive up like GET IN LOSER, WE'RE FIGHTING SKELETRON PRIME and that's what we'd do.

In the evening, when my internet came back up, I streamed Terraria for HGR and newbie. newbie was interested because he recently started playing Minecraft for the first time but has never played Terraria.

HGR provided expert commentary as I beat the Eater of Worlds a second time (HGR: "You're so bad") and then journeyed to hell and got myself killed by random demons. I should build a hellevator for easy access. Maybe that'll be my next project. 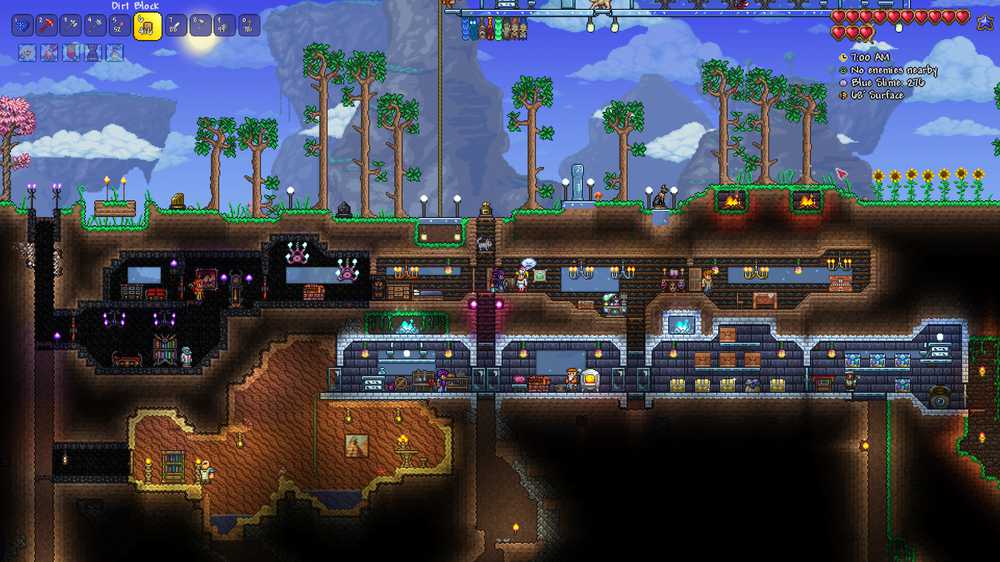