tales of lost blue and the surrounding lands

Finally decided to invest in fast travel. Made a jungle outpost (with pylon) and a dungeon outpost (to get the forest pylon, which I placed in town). I also got a mimic minion, which keeps japing me because I keep thinking I see a chest and it's literally my own minion. But it's worth it because in the evening I streamed for HGR and newbie, and HGR was like "Watch out! There's a mimic behind you!"

HGR, a veteran of expert hardcore mode, helped me prep for fighting the Wall of Flesh, with a proper ranged weapon, rerolled gear mods, numerous buff potions, and a long bridge with strategically placed fireplaces along its length. With all that prep, the actual boss fight turned out to be trivial. HGR was disappointed. "Normal is nothing," he said. "I shouldn't have given you so much help."

I then embarrassed myself by dying multiple times to random hardmode mobs. So it goes. But I managed to farm myself a cobalt pickaxe before signing off for the night.

Although the internet situation is annoying, newbie reminds me that things could be worse. He's living in the bay area, and they're having scheduled rolling blackouts because, apparently, electricity usage causes forest fires (??). So it's basically like last week's storm on a recurring basis. We told newbie he needs to get out of that place pronto.

I was farming mythril when I got an email that my Walmart grocery order was on the way. So I got the cart and headed downstairs. It was surprisingly cool for mid-August, with a nice breeze on my face.

I forgot my mask!!

I raced upstairs, put on my mask, and raced back to the parking lot. There was no delivery car in sight. Did I miss them in the few minutes I was upstairs?

As it turned out, no. On the contrary, they were 20 minutes late. Honestly a good outcome because I had time for a lengthy walk in the parking lot. The weather was perfect.

Anyway, today's progress: Got a mythril pickaxe and mined enough adamantite for one armor piece. Also made a sea outpost. Getting the pylon was annoying because my game glitched(?) and the golfer/fisher duo didn't work. (They're supposed to be best friends, but the golfer wouldn't even acknowledge the fisher's presence. Did they have a falling out?) But stylist/fisher worked, so whatever.

Finished my adamantite armor, got wings (finally!), and found a decent weapon (a shadowflame bow from a corrupt mimic). Now it's time to prep for fighting the mechanical bosses. This will be my first time fighting them solo; I've always been in a duo world with HGR, or a vgmc5 world with Dante/numbers/Lopen. The Destroyer randomly spawned on a couple nights and completely wrecked my face. I'm going to need a dedicated boss arena.

I was going to stream in the afternoon for HGR, but then the internet went down again. (booo) HGR got the Terraria bug though, and he spent a couple hours looking at Terraria stuff instead of restocking his shop. With this new patch, there's a secret world seed that you can enter to get a super-hard world with buffed enemy stats and new mechanics and boss patterns. HGR is very interested in playing it. He later told me he stayed up past midnight watching videos of a guy playing the secret world in hardcore. The secret world has lots of IWBTG-esque mechanics. For instance, when you chop down a tree, instead of dropping acorns, it will sometimes drop lit bombs. The guy in the video died because he just stood next to a bomb. "I was curious if the bomb would do damage to me," he said. It did. RIP. Then he created a new character and a new world to start over. That's how it is for hardcore players. 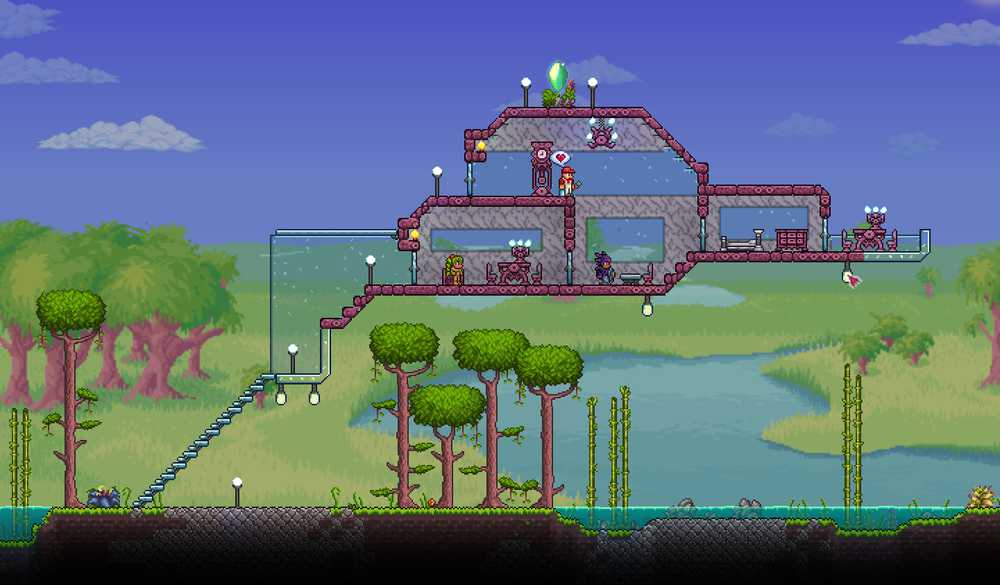