It is the first day of the online game camp. Todays programme: Blender.

I was already late and tried a few minutes before the start at 9 to get into the video conference... I don't know how, but it worked somehow.

I tried to get another plug into the power thingie, but didn't manage to do it. I don't know if the problem was me, the plug or that there was already another plug blocking the way, but it looked as if it'd work. At some point i felt pain near my shoulder, made a move i shouldn't have made.

One problem was- Linux. Yesterday there was a ChromeOs Upadte and a Linux upragde, but it didn't want to start because it wasn't connected to a power station. I thought, I'll do it later. And forgot. So this morning, okay there won't be problems quickly upgrading it,right?

Well, after a while there was an error message and two options: "cancel" and "restore". So that's why it told me to do a backup yesterday. Christoph didn't really know what the error message said, merely it was working with signatures and package sources but couldn't see what went wrong.

But that was not all. Suddenly another red message: not enough storage, files are temporary and will be deleted soon, or soemthing like that. I have no idea why, previously there was no problem, and according to what the computer said i had 13,5 GB on the system and 1,8 GB on the microSD.

I wanted to copy everything onto that, just to be sure, but it didn't want to do that because of short storage.

So i copied the files i found as important onto NextCloud. Ever since Stephan gave me access to that i had it connected in the file manager, making it easy. I don't know why he did it, and didn't want to use it for unimportant things. But because of the space thing, i have to now. I looked into the peanut can where all my SD cards are that aren't put into a device. Interesting to see how 2, 4 or 8 GB were massive back then. Now they're too little. I have a 1GB SD card. But if the microSD I have isn't enough, they won't either. I need a new one.

Finally everything was moved and i could start Blender. I don't know what about the upgrade, but i will do that after the Camp i think.

The stream from the HS also had problems, people didn't understand and lost track, internet problems... So they started again, i was also ready and could work. Just had to get a mouse quickly. Just hope they didn't do "subdivide surface" while i was gone. I had asked before and they haven't done it before i left.

So, now it ended and i wasn't finish with the tree. The keys changed, so i missed a step and wondered why mine is so strange. They use the new version, which Stephanie has trouble as well, i use the old one. So now i finished the tree i only got half of the log part, and then i made a bush. I hope the textures work.

So i made a running animation for the fox, it's not that smooth and the missing joins (Gelenke) are a bit hard not to ... i don't know what to say to it, but it's hard to compensate, i am missing a joint on the legs, in general the legs are not really fox like. One day i should make a completely new one with correct anatomy.

We went shopping. They bad a bunch of Chase plushies, one Sky plushie, and a hoard of Peppa plushies. And Christmas deco, and Weihnachtskalender. And a Football Donut, where when i heard the Penny radio talking about it, was really looking like a Football... It wasnust a Donut with a Football pattern on the upper side. And the Rainbow Bagel. 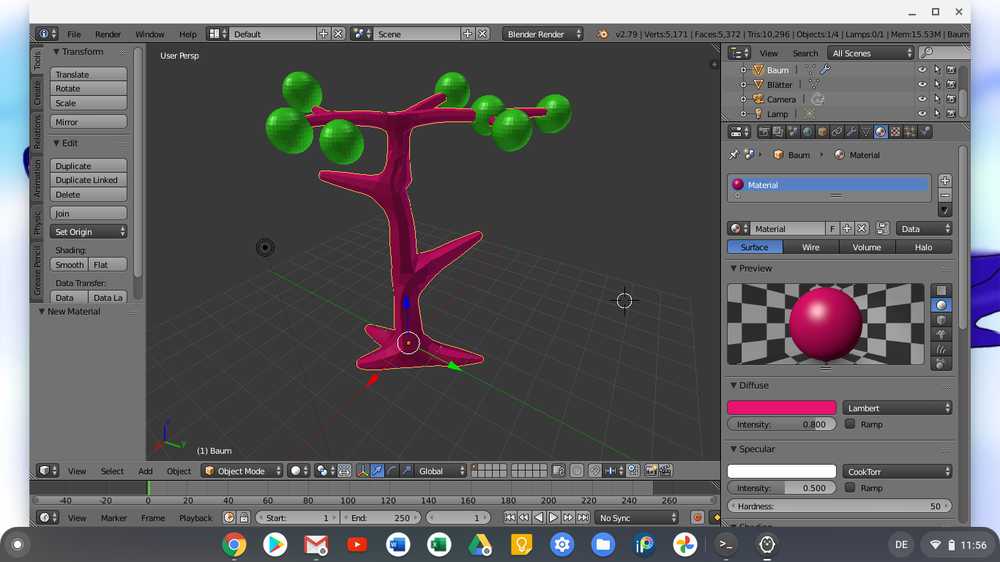 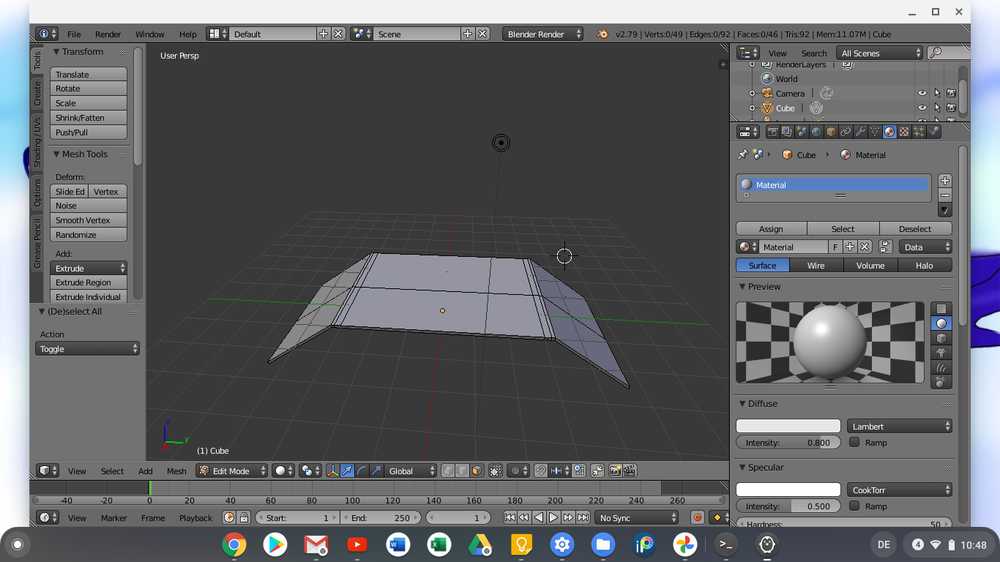 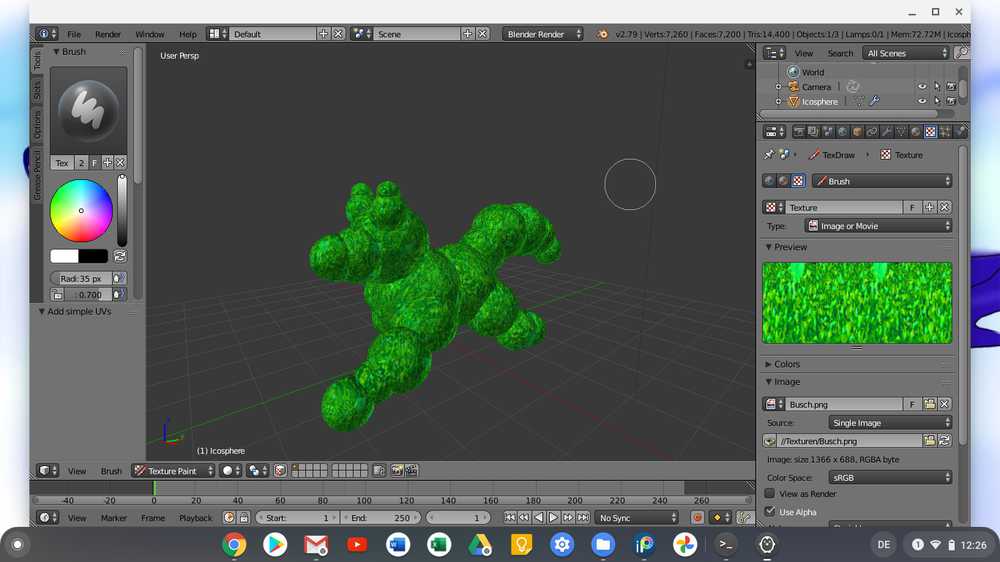 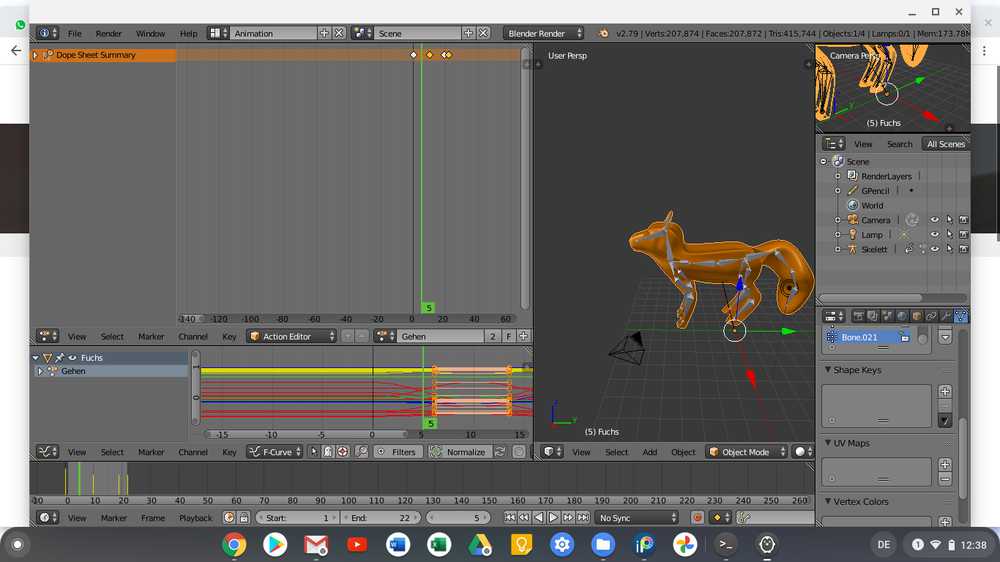