We went early to Penny and arrived at 07:56. There were already a few people and a queue. My sister waited outside (1 Person = 1 Shopping cart). I went in, tried to keep the 2m distance but it wasn't easy. I got two Cappucinos to-go and saw someone turining into the street where the hygiene products are. So I followed to get to our main goal. I saw a lot of packages. At first I was certain it was toilet paper but then, while I waited, i got unsecure... Is it toilet paper? or ZEWA? (Everything said ZEWA, so...). There were a lot of dark blue packages and a small amount of pink ones. I took a pink one because there I could certainly see it was toilet paper. I couldn't reallyy decide anyway, the dark blue looked nice. I heard an elderly woman say one of them is scented. I was happy to have a pack (as it's allowed) and went back. It's dream toilet paper because: it's pink - like dreams - , from ZEWA, ultra soft *and* 16 ROLLS!!

On my round i looked if they got flour but there was only a lot of milk. For some reason I got the last Müllermilch again.

Then I wanted to get Sesam-sticks but there were only salty ones. There weren't many people at the cash desk, so I was out pretty fast.

And then for a minute I feared my sister was being kidnapped. That's so silly. Of course not. Why do I have these thoughts. She was just standing behind that advertisment sign.

Now I'm catching up on the Online services. There I drew a picture for the verse they used, as I like the comparison.

We had lunch and then our little brother went into my sisters room unnoticed. When she went there she found a bed covered in Cappuccino. I had left my cup there next to the bed on the dresser and he took it. Nearly the whole bed had to be changed but my phone and laptop - both located next to it where saved although the chance of them being ruined was so high! Ah, I'm so thankful they're alright as I first of all love them and secondly can't replace them that easily. Especially because my term paper is on there I need to deliver on the 24th. 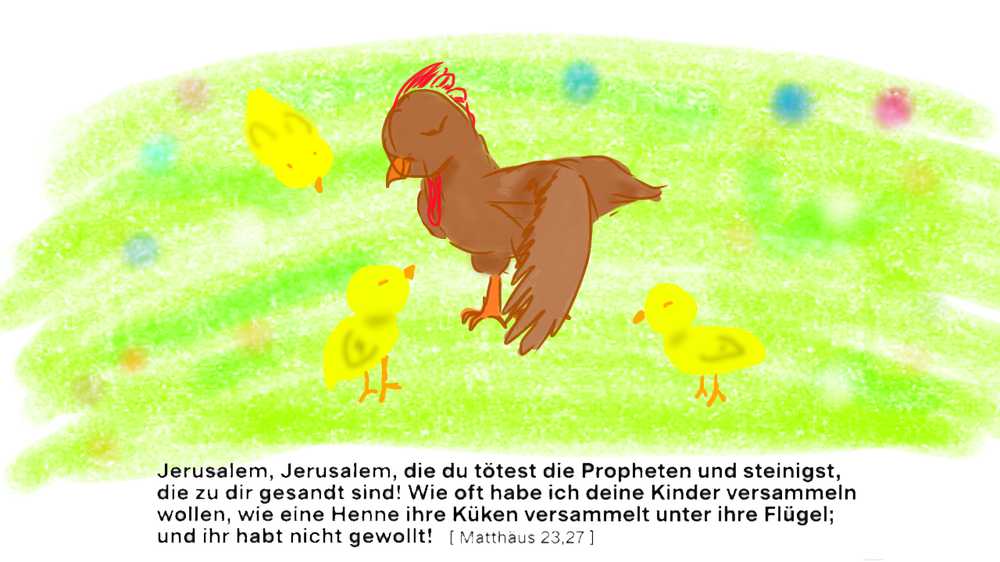 Hola!
Wow, your day sound funny, sorry for the cappuccino (R.I.P two lovely cappuccinos 😭, I love the cappuccino)
And yes the best is always take care of the drinks
You're from France? I'm not sure, but I'm thinking that, sorry if is an uncomfortable question or something
I'm from Argentina, here we are in quarantine too, yesterday I see a person being take by a special group of sanity, the police, ambulance and even the firefighters were there, it was near to my apartment
Personally, I love to see the city so empty, is something strange but magical the silence
Obviously, I'm not happy, the covid is a big problem 🙁, my family is away and I'm very worried about my siblings, they live in Chile, there the people isn't so conscious and they don't have social responsibility 🤦
I wish everything can end fine
Here at 9 pm all the people applause for the medical workers, in your city how is everything?
Sorry if I wrote something bad, my English isn't perfect 😅