Moved Into New Place, No Refrigeration For 3 Months

Well it's been a few days since I last wrote an entry. I actually wrote some private ones, but I'm waiting until a new "18+" feature is activated before I post those publicly. It contains 18+ content that I wouldn't want some people below that age to read, so wouldn't it be better to have a maturity feature like that?

Anyway so many things happened today. From our first day we were at the hotel, me and my dad have followed a certain routine. Basically we get up, eat some breakfast (basically just fruits), walked out to Wal-Mart to buy more food, and starting from the second day go into the nearby mall to look around while carrying groceries (though by the last 2 days we walked there first before going to get groceries), and then went back to the hotel. That same thing happened today, except we bought a lot more than just food, we bought a bunch of appliances and wares for my new home.

It was a lot to carry, and the normal walk back in the sun takes about 20 minutes without carrying anything. This one took us far longer because we were carrying so much. We bought a rice cooker, a scale to check my weight daily, two saucepans (a smaller one came with the bigger one), two bowls, two glasses, cutlery, bananas, a gallon of water, a bunch of dried brown rice and beans, two large aguacates, dishwasher soap, big bag of toilet paper, big bag of paper towels, some bread, brita water pitcher/filter and I think that's it. There's probably a bunch of things I left out that I can't recall right now since the last time I looked at these items was over 12 hours ago, and a bunch of other things have happened since then.

Anyway the new place I'll be living at will be a temporary home until the loan for me to buy this $65,000 condominium is accepted. It will be a 30 year loan, and I'm doing a $15,000 down payment or something around that, and my monthly payments will be $215 a month for 30 years. Yeah, this is extremely cheap housing, if the deal goes through. It's going to take me a few months to get the loan offer accepted, so I just have to wait.

So for now I found this place that's $835 a month. It is basically most of the second floor of this one multi-family home. I'm renting it from the landlord and it comes with free Wi-Fi and electricity up to $50, but I have to pay for the water and any extra electricity above $50. This is better than the $800 for 5 days at the hotel. Also, we shopped around a lot. I've looked through hundreds of listings and very few places offered the amenities included like this. Actually, technically water and electricity were never included in any of the other apartments I looked at, and this place wasn't an exception, but it was one of two places that offered free Internet.

The other place was $340 a month, but it was basically another office in a commercial building. The entry doors and walls of that apartment were see-through, like how a lot of those offices are, so I could be seen inside technically, doing whatever. No privacy. Also there was a bunch of traffic all the time just right outside the place with cars piled up on rush-hour traffic. I had concerns about having clean air to breathe, since literally upon stepping outside the open building, it's just cars. By open building, I mean it's all outdoor air until you go inside an office. I dunno, it's like a motel where you can go "inside" the motel, but you're not really inside any closed areas until you go into a motel room, and you're still breathing in the outdoor air even after "going inside" the motel.

There's like 10 feet between the building and the traffic, it's almost possible to leap from the building entrance right to the main road outside. And let me tell you the air there is not clean. I had to sit outside for a while upon our first time visiting that place, and I felt like I was just inhaling exhaust the whole time. Literally bumper to bumper traffic, close enough to me that I could almost reach out and touch the cars. There was such a small gap between the road and the buildings on the side and I waited in that gap.

Anyway I didn't like that $340 place because, despite it coming with the Internet and maybe even water and electricity, I didn't feel comfortable there.

This $835 place though, it's big and spacious. Three rooms and 1.5 bathrooms, comes with a kitchen and stove, and a terrace. Best of all, natural light comes in. In the other place, there was no natural light. Like I said though, we shopped around, and this was the best place. There were places that were $1200 a month that didn't come with Internet.

Before going to Wal-Mart we went to Home Depot first and got a doorstopper. Then when we were ready, we packed up and I called up an UberX and it took them 20 minutes to arrive. They were in a Toyota Yaris and our stuff did not fit in their car, so we cancelled the order and we just got a taxi. The taxi driver charged us $40, but there was no other choice. We kept trying for UberXL, but there weren't any in the area. We waited like 30 minutes trying to get an UberX before giving up and getting a taxi.

Our taxi driver didn't speak any English, most people we have talked to don't, which is fine. Our landlord spoke some English, which is great. When we arrived, he gave us a tour of the place, I signed some paperwork, wrote him a check, and completed the registration for the water utility bills to go under my name. He showed us around the property, gave us 5 different keys for different doors and gates, and the mailbox. Showed us how to reset the Internet, and so on. Told us about the other tenants. Very friendly guy.

The place we are staying at has no furniture except a small table and a small cabinet and we didn't buy any. So I'm sitting on the floor with my back against the wall as I type this, with the laptop on my left thigh. Literally completely empty area. My dad unpacked all the stuff and set up everything while I figured out how to sign up and pay for the water utility, and how to get a driver's license here. The Puerto Rican department of transportation website is entirely in Spanish, so I couldn't understand a thing. I used Google translate to translate certain sections at a time though and I worked my way to figuring out how to get a license. I'll have to wait until I get a document that confirms address residency though such as an electricity bill or bank statement or something, and it has to be an address in Puerto Rico. So I can't get my license until then.

At around 3 PM I went to go to sleep, though not really, 18+ though. My dad went out to buy some sleeping bags for us while I "slept" in one of the rooms on the hard concrete floor, because the other home already has beds that come with the property, so he wouldn't have a reason to buy beds for me here. So he went out and found some stores, he was outside for over 3 hours walking to the nearest stores and looking for any sleeping bags, and couldn't find any.

It rained a little. after he got back, and I cooked up some beans and rice. The condominium I'm purchasing comes with a fridge, so again I wouldn't have a reason to buy another one. I'm going to be entirely eating and living here without a fridge or freezer, which I can do just fine with all the foods we currently have. I mean we have a rice cooker and a sauce pan, I can cook up the beans and rice that we bought, and just eat that. I could eat the bananas and aguacate fruits that we bought, those also don't require any refrigeration. Same with the bread and peanut butter and jelly, no refrigeration. Except maybe the jelly, I think it's refrigerate after opening. Don't have that option though.

Anyway the next 3 months I'll be living without a fridge or freezer, which is completely fine and doable especially as a vegan. It's kind of weird how doable it is, like I never thought before how unnecessary a fridge could be until now. I could buy up some potatoes too, onions, garlic, tomatoes, squash, and any fruit basically, any pasta grains and even the tomato sauces. No refrigeration needed for them. If I wanted some cilantro though, I would need refrigeration, or if I wanted a spinach salad. Still, I could buy some already chopped up and dried herbs and spices and those require no refrigeration either. Easy. I could also buy a bunch of junk food that don't require refrigeration, but I don't want to buy any junk foods.

Anyway I will likely lose a bunch of weight this way, and it will be fun.

The rest of the time I just browsed the Internet and watched some videos. We ate the beans and rice with an avocado and some tomato sauce, and it was freaking delicious. It's pictured. That's the aguacate, which is avocado in Spanish, and it's so huge that half of it fills up most of the plate. This is basically what I'll be eating most of the time here, that and some whole grain bread with peanut butter and jelly, and some other fruits every now and then.

That was my day today. Not much else to add. Walked around 10k steps mainly just from the Wal-Mart. For 2 out of 5 days at the hotel, I walked over 16,000 steps, and for the other 3 I walked an average of 10,000 steps. In these 5 days in Puerto Rico too, I have spent so much money. Every far place we went, we would take an Uber, which is like $15 to $20 a ride. I'd tip every driver too from $1 to $10, with the average being like $7 probably. In one case where I gave $10 tip, one of the drivers drove 20 minutes to our location, then another 10 minutes to drive to our destination for $12, and he looked/acted pissed at rate Uber was charging him for this ride, so I tipped $10 at the end.

I'm really sleepy now and can't continue typing or else I'll pass out. So I'm going to sleep now. 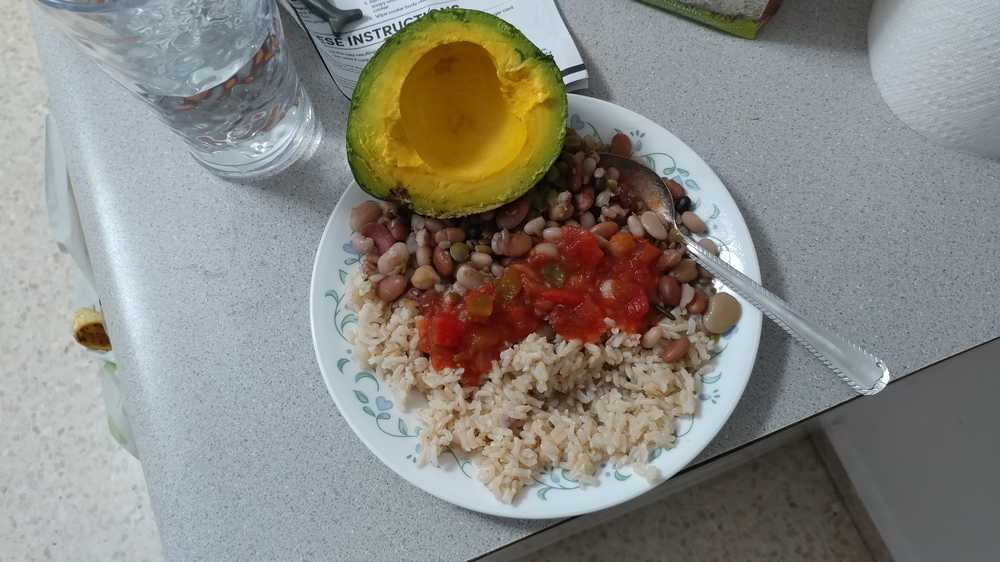