I just woke up a few minutes ago. Today is the day I'm choosing not to take part in any form of entertainment whatsoever except for reading. No music, no videos, no social media. Last night before going to sleep, I gave a friend $300 so he could get a laptop. He has never owned a laptop before except one in high school which broke after a year. Oh wait, I need to access social media to tell him more things.

Okay I just finished sending him more advice. That did take a while. He is not that familiar with using computers, so I gave him more info and advice. I chose the computer for him, an i7 laptop with 16gb of ram and 512gb SSD, and gave him the money to buy it. He just had to pay another $100 extra since it was $400. I am actually very surprised anyone doesn't own their own computer these days, he says he mainly uses his smartphone for things.

I am also choosing not to eat anything the entire day today, this is as punishment to myself for eating over 4000 calories yesterday and for having fun with myself for too long. I have to reset my life in some way, and this is the way I'm choosing to reset it.

I'll consider May 1st as being the first day of my sobriety, even though technically I am starting today, April 30th 2021. It's a weird date though, and May 1st is just so much better.

Today didn't go as planned. I ended up eating some food, for a laughable reason; because I got hungry. I mean hunger was expected, but I can't believe how easily I broke my restrictions for the day. At least I didn't eat until noon.

I left home at around noon and walked to the nearby grocery store today, which was around 30 minutes away. It was a weekday and there was a bunch of cars and people everywhere. Actually, when I got to the shopping center where the grocery store was, I went to the mall first. My pants have holes on them, and I only have these pair of pants only. So I wanted to go to this mall so I could buy some new pants to wear. From my knowledge having explored the entire mall before, they only sold women's clothing here. I had to make sure though, so I went up to a lady who was hanging clothing up in one of the stores and asked her in Spanish if there were any stores here that had men's clothing, and she said in the entire mall there were not any.

Yeah so this entire mall has a bunch of clothing stores, like 6 or more clothing stores, but they only sold women's clothes in all of them. It was kinda cool just approaching the woman though and conversing in Spanish only. That was cool as heck. I mean I shortened our conversation here, I probably asked "do you have any men's clothes here?" first, and then when she said no, I asked "in the entire mall, is there a store that sells men's clothing?" and she replied back, and then I was like "gracias", and left. It was very casual.

So anyway those were the only things I bought. I bought 1 liter of this "Smart Juice Organic Antioxidant Force" for $6, 5 pounds of potatoes for $3, and some crunchy peanut butter for $3. Yeah the juice was expensive and it's not that much, but it was so good. I walked to that same concrete road block I sat on last week, and I sat on it again today, chilling there as I drank my juice while looking at the traffic.

I also observed this lizard that was crawling around as I drank, it was kinda long, probably slightly longer than a foot, and very thin. It looked like a snake. I watched as it snuck through the grass, very visible to me because I saw it entering the grass, and it was just crawling around in there, probably thinking I couldn't see it. It jumped up high and started sprinting when this huge truck came by and made a lot of noise, you know the noise huge trucks make when they slow down, it was this giant truck sigh, it was loud, and that made the lizard panic and sprint up to this nearby tree.

I got up from there and headed back. It's so much fun just walking through these neighborhoods. Oh yeah, I forgot, on the way to the grocery store, there was this hen walking around on the road. As I approached shirtless, with me carrying my shirt in one hand and whacking myself on my back and legs as I walked around, as to prevent any mosquitoes from approaching if there were any, this chicken was freaked out. It started clucking and screaming loudly as I approached, and it was right in front of this 7 or 8 foot fence, I couldn't touch the top without jumping. This chicken also started panicking much like that lizard and it leaped up this 7 or 8 foot fence, landed on the top, and jumped down on the other side. Yeah it was an incredible sight. Obviously I wasn't going to harm the chicken, but it was scared for its life and it flew.

Looking online, people are saying they can only jump 5 feet? This one jumped over my head and on top of this fence that I'd need to jump to touch the top of. It was really incredible. One day it's going to have its neck slit unnecessarily though and people are going to eat its corpse, very sad.

I arrived back at the mango tree, and why not, I grabbed some mangoes. I picked up six mangoes, and put them in the grocery bag. Only five are pictured because I ate one before taking that picture. I could have brought home like 20 mangoes if I wanted, but actually the mangoes fall on this concrete sidewalk, so most of the mangoes are cracked and are oozing juice on one side. I picked up the clean ones that didn't have any openings upon falling and brought them home.

I ate all these mangoes today, I finished drinking that juice I bought, and I ate like 9 potatoes, and I ate some peanut butter too. I mixed the peanut butter with jelly on a plate, and just dripped in and ate that. I wanted to make PB&J sandwiches but the bread I have started growing mold, a teeny tiny amount, but it was visible, so I just threw the entire thing away. I also ate peanut butter by itself, just dipping into the container and licking the knife.

I didn't complete as much at work as I wanted. Yesterday a co-worker told me that my boss' dad passed away recently and that's why my boss took the week off. My condolences to him.

After work, I was basically just on Facebook, browsing around, chatting with people. Hours passed by that way.

Also because Iyazo posted a selfie, this is my selfie haha. I have to wear a jacket because of mosquitoes. I'm also wearing pants and socks.

So yeah that was basically my whole day today. Today went by really fast, although I can't say I did much. 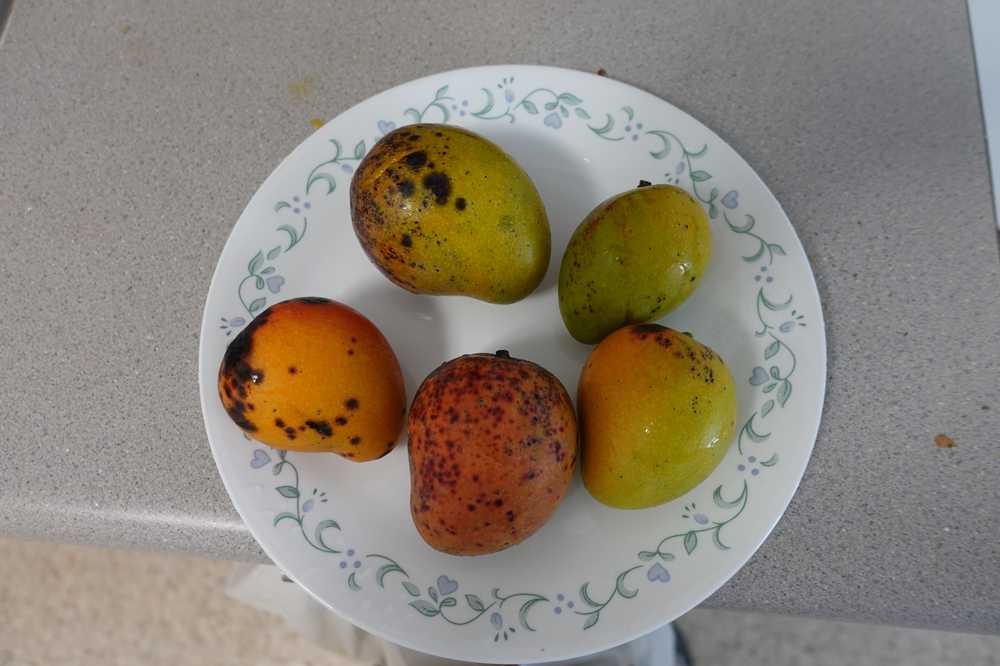 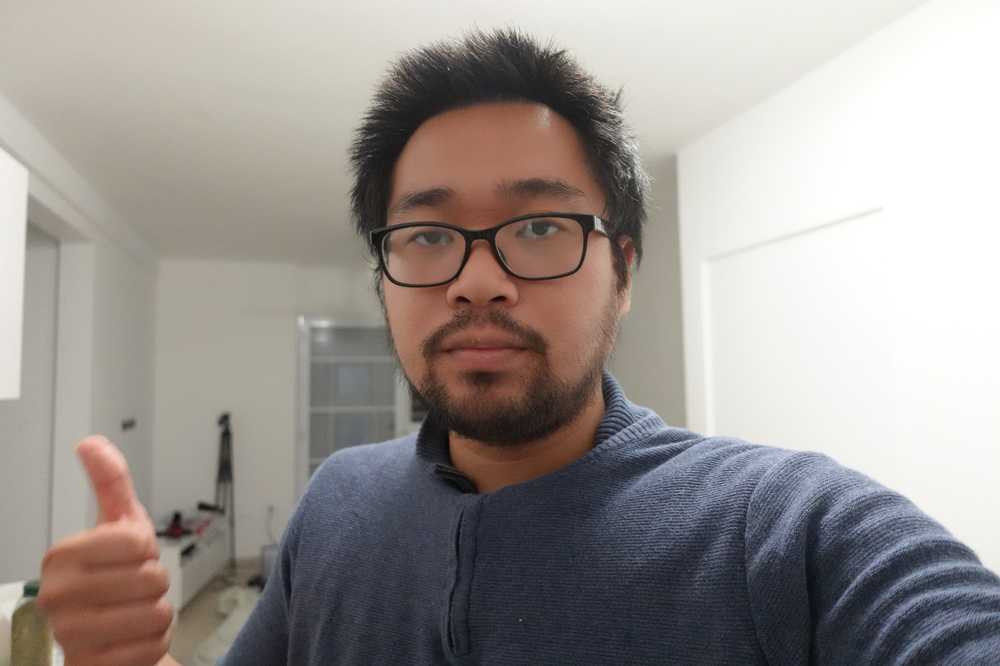 That was really nice of you to buy your friend a good laptop and help him to learn to use it! You're such a nice guy 😊 I really wish you wouldn't starve yourself though as punishment...even if you messed up, you still need to eat something, so I'm glad that eventually you did. The things you eat are pretty healthy anyway. Eating peanut butter right out of the jar is one of my guilty pleasures. The jar that you bought for me is only made from peanuts and salt, nothing extra, so it's really good. I ate a bit more than half of the jar when I was home 😅 It just seems to me like you need to work on your impulses and self control a bit. I know it's easier said than done...

Hmm I was reading a little about Puerto Rico and apparently most people there only speak Spanish, so that doesn't surprise me. Maybe people have seen you around enough to know you're from the area now and are more comfortable speaking to you in their language? Immersion is really good practice, even if you don't understand every word, you'll definitely improve over time. Hmm as for pants...maybe online shopping is the way to go?

@iyazo Yeah I mean he knows how to use a laptop, he just doesn't have one of his own. I figured it would change his life dramatically, so I helped him get one.

I'm not able to starve myself even if I wanted to lol, and I wanted to that day. You starve yourself all the time though, take your own advice on that ;)

Glad you enjoyed it! If you want to buy some more food, I can probably put up my offer to buy you food again, plz don't eat the homies 🙏. You can use this site called Cronometer.com to track your nutrition, you can put in what foods you eat and it will tell you the nutrition you get. Just eating what I ate today which was 9 potatoes, 6 mangoes, some peanut butter, also the juices, fulfills pretty much every nutritional requirement, exceeds 100% on almost everything. Heck, just eating 9 potatoes alone already exceeds 100% of most daily vitamin and mineral requirements, they are extremely nutritious.

@JustMegawatt Yeah I know I'm the last person who should give that advice lol I have been eating again though! That sounds like sooooo many potatoes omg I don't think I could eat that many! I'll look into that site, I know there are some nutrition apps out there too. I won't eat the homies, no worries 😊 I'll let you know if I need more help with food once I get out of the hospital, thank you!

Of course! I'll post more selfies in the future 😊