Today is Tuesday, May 18th 2021 and it was an above average day today. Actually, quite a lot of things happened today, more so than normal. This morning I did my typical morning chores such as throwing out the trash and washing the dishes. I did something extra today too which was I washed my clothes today. That was basically my entire morning

At 9 AM, I had work. I also had a meeting today, it was a celebratory meeting with a client for helping them get one of their servers set up. We just celebrated and partied together in a zoom meeting. Usually my camera is off for these meetings, but today I turned them on because I had to today, and my integrated webcam had issues, like it was distorted and gray and only captured half of my face because it was very zoomed in. We played this game called Reverse Charades where everyone acts out a charade and one person has to guess, instead of one person acting it out and everyone else has to guess. I played that with my messed up webcam.

I wanted to fix it though, so during that time I was downloading a firmware update for my Sony ZV-1 so it can be used as a webcam. The firmware took a while to download though and we finished playing the game by the time the download finished. Oh well. I still managed to use it after the game ended, and it worked beautifully. The rest of the meeting was just talking about random things, and we were patting each other on the back for the work we completed and the teamwork we had. It was for sure a team effort, I was thanked a lot, but I couldn't have done it without other's help and input.

I continued working after that, until around 12:00 PM. Then I went out to go to the nearby grocery store, I wanted to buy a watermelon so I could make juice with it. I went to this fruit vendor that was right outside the grocery store, and I bought this $8 mango. I brought $20 with me, so I ended up also buying a $3 aguacate (a very large avocado that grows here), and $3 of organic bananas which was a lot of bananas. I carried all this stuff home and the walk was not that bad this time since the watermelon I bought was a lot smaller, and I carried all this stuff in two plastic bags.

When I got home, I juiced watermelon for the first time using this machine. It came out as this bright red color and the taste was so tasty. Tell me that doesn't look like a health potion. Wow. I enjoyed it a lot. Could I do a juice fast and just drink this kind of juice for 90 days straight though? I liked the sweet flavor, but it was missing saltiness. I also opened up the aguacate and started to have some, but then I was like, this would be perfect with beans and rice, so I cooked up some beans and rice so I could have it with the aguacate. Anyway, suffice to say, I ate a lot.

I drank two jars of this watermelon juice that I got for $8. I think that's a fair deal. That's a lot of juice, and it was so tasty. I'm really contemplating starting a juice fast and drinking nothing but these fruit juices for 90 days. The only problem would be that I have to walk to the grocery store every day and have to carry this watermelon with me every day. I don't think that's a bad thing, but it is a lot of work. I walked out in the sun for like an hour today, and it was so hot, and carrying this stuff doesn't make it any easier.

I didn't do much after work, I was just on Facebook and YouTube a lot. I'm kind of bored I guess. I would like to read some books. I am very sleepy since I'm writing this entry after midnight. Anyway that was my whole day today. Also I didn't pleasure myself once today. 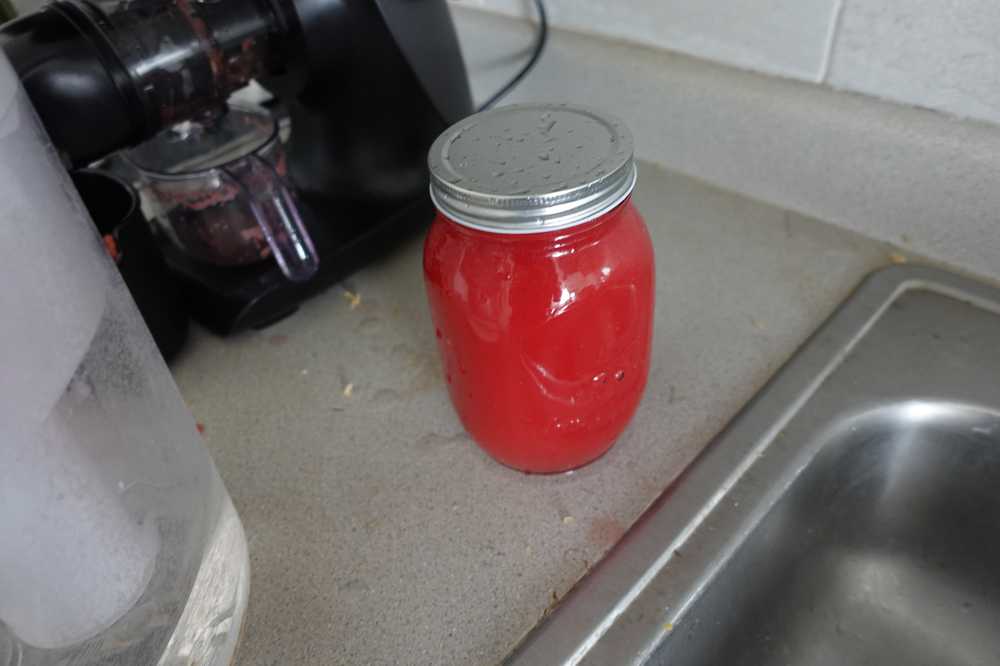 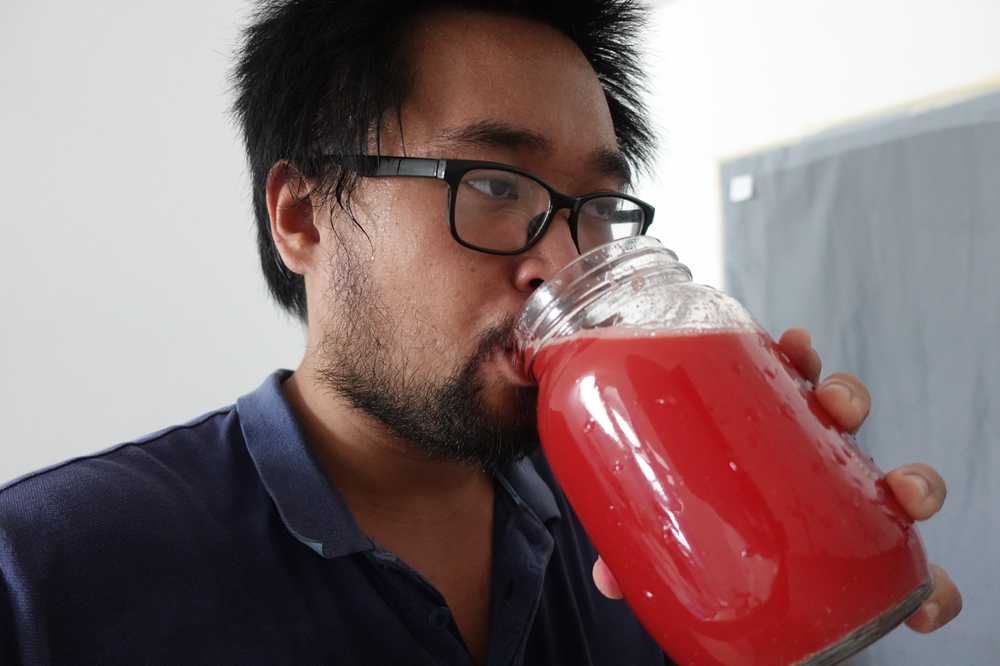 Be careful to make sure you get enough nutrients, I've heard that juice fasting can be dangerous, especially for so long. Maybe next time walk to the store, but get a ride back so you can get more/larger groceries like multiple watermelons. That juice looks so bright and yummy!!

Hmmm I recommend a book called House of Leaves. Bit of a long and complex read, but it's one of my all time favorites.

@iyazo What dangers have you heard from doing a juice fast? I know I called it a fast, but it's actually called a "Juice Feast" when you do it for that long, making sure you get all your nutrients and calories in. It's not a fast at all.

The only thing stopping me from doing it right now, is I have to walk 30 minutes there, and another 30 minutes back daily. I don't know if I can do that for 90 days straight, even if I wasn't juice feasting.

@JustMegawatt Uhhh....ok.... but it's really not a "feast" of any kind. Actually "juice feast" is purely a marketing term. You're planning on not eating anything and you're starving your body long term- think about that and the ways it could potentially be dangerous, please 🙏

True, I have heard it has health benefits to do this, but only for VERY short periods of time. 3-7 days is what I've seen recommended, not 90 days, not even a month, or you could end up very malnourished. By juicing the fruit and not consuming the pulp you're not getting the same amount of fiber and a very low amount of daily calories compared to your normal intake. It's claimed that juice fasting "flushes toxins from the body" but there are no specific medical articles I could find stating what these supposed toxins are or how simply drinking only fruit juice removes it from your body (outside of the obvious "you pee it out," I mean how does it snag these supposed toxins and remove them?) Besides, if you have a healthy liver, your body does this naturally, especially if you don't drink or smoke any toxins in your body are easily already taken care of BY your body. That said, I couldn't find any medical studies done on the effects of long term juicing other than articles saying how unhealthy it is in reality.

Also, I just asked my nurse about it since she came in while I was typing this and she looked absolutely horrified and confirmed what I've already typed. She said yes you can lose weight this way, but depriving your body of calories, fiber, and protein like that is a very unhealthy way to go about it and it will likely not keep the weight off long term. She said it's also very likely that it could screw up your electrolytes and blood sugar levels, leading to exhaustion or straight up passing out. Additionally, some juices contain oxalate, a naturally occurring nephrotoxin, which can give you kidney stones or cause serious kidney damage in high amounts like you may get during a long term juice cleanse...even complete kidney failure could occur after only a few weeks. I told her I was asking because I was worried about you and she said you'll likely be hungry within a few days anyway if you do try it, along with keeping up your regular routines of walking and exercising, you likely won't have as much energy as you might think you would get from juice alone. Your body will actually enter "starvation mode" where your metabolism slows significantly to try and reserve calories, actually decreasing the amount of weight loss and increasing weight gain once your regular diet resumes. Your body won't be able to help your muscles recover after a workout because of such a low protein intake and you could actually lose muscle mass as your body consumes that instead when you enter starvation mode. You're getting your vitamins and minerals, sure, but the body needs more than that to survive long term.

@iyazo Yes I'm well aware of everything you say, I make sure to explore both sides of the argument to be able to come up with a reasonable understanding. "juice fast", "juice feast", "juice cleanse", etc, are marketing terms but they're not by the fruit industry though nor are they by the fruit juicer industry, they're the terms people who've done them have used. I've visited some fruit websites and juicer websites, none of them are recommending a "3 day juice fast" or whatever, and of course not even a 90 day one.

Most nurses and doctor's don't know much about nutrition, they barely take up any courses in it. Otherwise they'd know they can reverse our leading killers: heart disease, cancer, diabetes, etc, through a plant based diet alone and they would be recommending it. Other "conspiracy" theories for this is that they intentionally want patients to keep taking medications for life, since that's where the money is, and also why they don't serve healthy foods in hospitals. Also fruit juices have a lot of electrolytes, that should honestly be the least concern.

You mention kidney stones, but yeah vegans / vegetarians have the lower risk of kidney stones too: https://pubmed.ncbi.nlm.nih.gov/24752465/

Worst case scenario is I'll turn into a skeleton, but that's really unlikely to happen. Anyway in the event of the worst case, I can still recover from it just by eating back regular foods again. From some of the 90 day juice fast videos I've seen, people are able to continue about their day and workout every day just fine.

If you have wi-fi, this guy gives a very compelling case in eating a fruit based diet: https://www.youtube.com/watch?v=bcc0bhZMIfk

I don't follow that lifestyle and medically it's better to add cooked foods and a wide variety of plant foods not just fruits, but that video is very compelling. He also doesn't supplement anything which I think is dangerous since almost all plant foods have no Vitamin B12, but it seems to be working just fine for him. He's been vegan longer than me, he's far healthier than me, and has done his own research and experiments with it, so I can't criticize his decision.

It is 30 minutes long though so I recommend having wi-fi if you are going to watch.