Today was a long day on the road. After a leisurely breakfast of Chinese fries, cherries, and kropok, we set out around 9 am.

Today was also a big day in Wolvden for multiple reasons. First, Black Cherry Bomb grew up and began her career as stalker for Ravenlight/Megalovania. She replaces Lucky Taro, whom we're immortalizing at the age of 7 years and 5 months. (Our leaderboard girl! She was born at a modest 497 stats, but she's risen to #9 on the pack member site leaderboard at 1173 stats. We'll miss her skills, even though Cherry will eventually become a better stalker than her.) Second, it's the first day of the lunar event. The new Losna base, deep iridescent blue on black, is basically everything I could have asked for. I'm already coming up with designs for Ratatoskr, our future chaser stud. My first-impulse design: 25% red smudge heavy and red predator, 100% white mask, white socks, and white tail tip, and leave the middle empty so the base can speak for itself.

For lunch, we stopped at Wendy's. It felt so decadent to walk into a fast food joint without a mask and order a burger and sit down to eat like a normal person. I got a bacon bourbon burger and it was great.

We reached our Hampton Inn at around 6 pm. At the check-in counter, Dad immediately struck up a jovial and very loud conversation with another family in line. That's just how Dad is. He always puts on the Jovial Dad skin when socializing with randos.

In more important news, there were cookies by the front desk. I took a couple and gave one to R.M. They were oatmeal raisin. RIP.

None of us (except R.M.) were hungry, so we decided to do a bit of pre-hiking at the scenic trails overlooking the Cumberland Falls. Nice waterfall. Nice walk. Nice Regigigas. I didn't have my phone out, but Dad is always checking Pokemon wherever he goes, and he was like "Hey! Legendary raid!" He texted his friends back home to come raid with us, but his phone kept overheating and freezing when he was trying to send out the invites. We had a narrow loss with four, and then a reasonably leisurely win with five, and then it was 8:30 and time to head back.

I was dismissive of the whole Jovial Dad thing earlier, but some people really like it. Back at the hotel in the evening, we ran into the woman we saw earlier at check-in, and she said her son was really charmed by Dad. "He was like, 'Does he really sleep in a king bed?' And I said yes, and we have one at home too, and he said 'Does that mean I'm a king?' " I'm updating the Jovial Dad skin with an optional crown accessory. 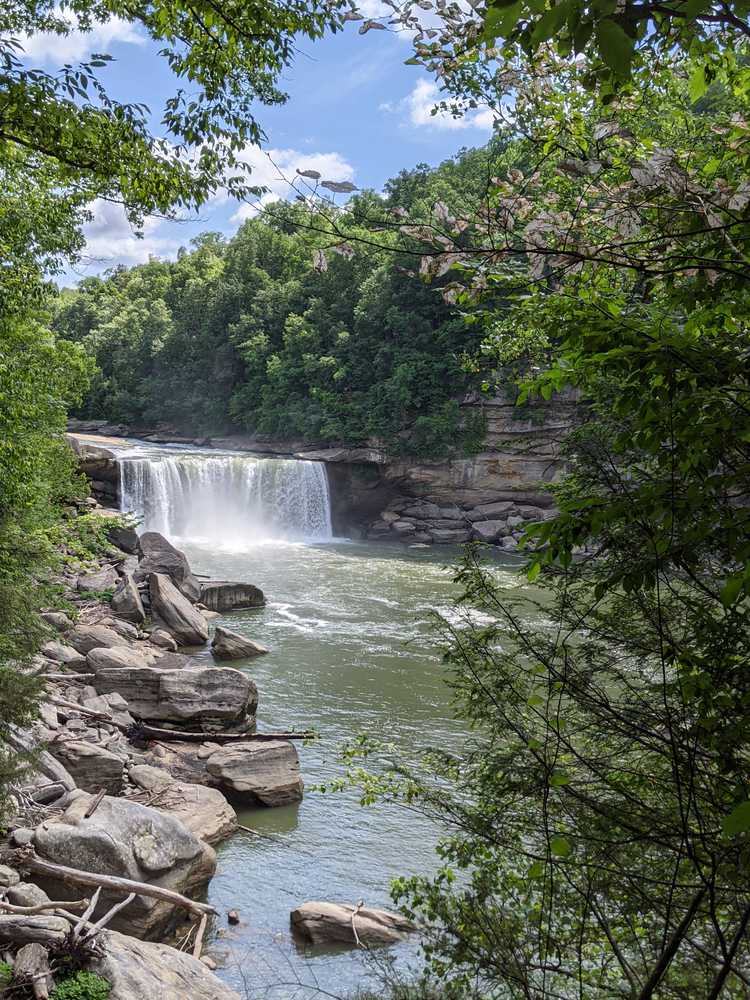