Traveling with parents presents its own challenges. For instance, Mom is very concerned about Mom Things (tm). I mentioned the holes in my pants and she was like bloo bloo bloo bloo!! She insisted we go to Walmart yesterday to try on new pants. The offerings were pretty meager so here I am still in my old comfy pants, but I think Pants Shopping is on the agenda once we get back to town.

Our plan for today was to hike the Dog Slaughter trail, which the visitor center blob billed as a nice one-mile hike. Our GPS took us down an unmarked creepypasta-looking gravel road with no internet signal. After a few minutes we came to a weathered trail sign along the side of the road: "Dog Slaughter Falls 4." The place was deserted. There was no parking. We didn't sign up for a four-mile hike. Also, Dad accidentally left his hiking shoes at the hotel. So we turned around and left.

Back at the hotel room, Mom checked google maps and found that the rather dubious looking sign we saw was supposedly the genuine trailhead. But none of us were down to return. Dad took the opportunity for an air-conditioned nap.

Then we set out for the Yahoo Falls trail to see the tallest waterfall in the state. It was pretty tall, but... "More like Yahoo Trickle!!" said Dad when we finally reached it. A park ranger explained apologetically that there hadn't been much rainfall lately. But the waterfall site was pretty neat: behind the waterfall was a huge bowl-shaped hollow carved out of the rock, with neat rock formations and a path to walk behind the waterfall. Rock park! Best vacation!

After our hike and a detour back to the visitor center for Dad to take over the gym, it was 4 pm and time for lunch/dinner. We decided to dine in style at the Riverview Restaurant at the nearby lodge. I got the all-you-can-eat fried catfish and hush puppies (and couldn't quite finish my first plate oop). R.M. got the spaghetti, described on the menu as "Large serving of spaghetti with meat sauce or marinara, served with garlic bread." It was the only menu item specifically described as large. This restaurant knows what guys like him want. 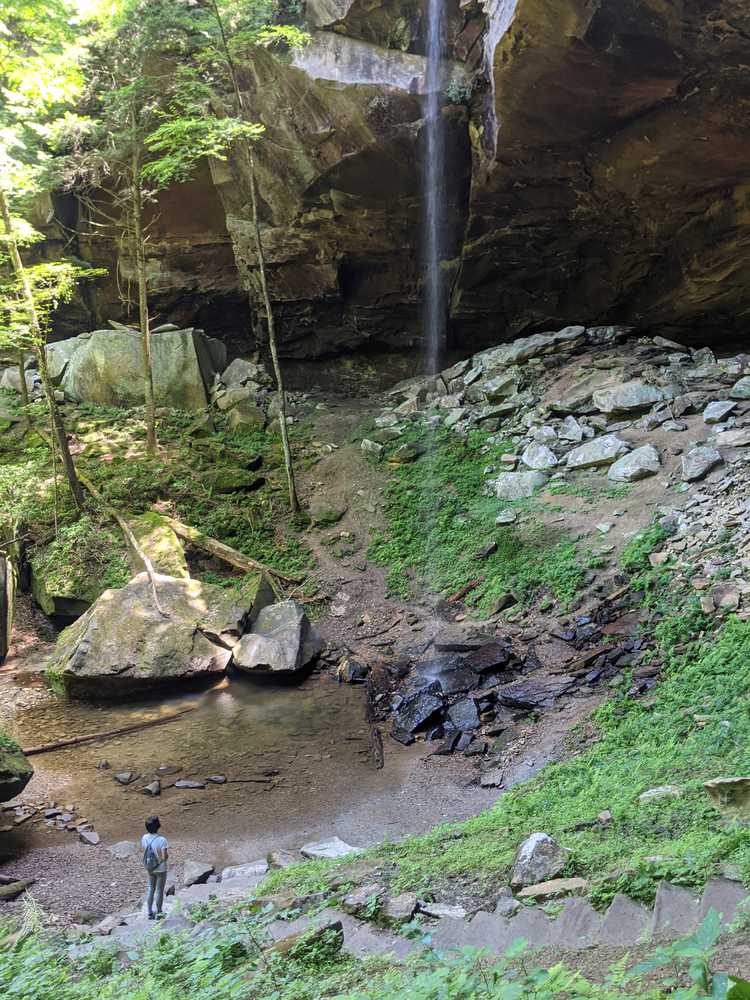