Today was a really horrific day, one of the worst days I've ever had. I felt so bad the entire day, so entirely devastated and depressed and abandoned. It was the day right after I "broke up" with Aloe, though it wasn't really a break-up since we were never in a relationship, but it was developing into one, and now anything romantic between us is now over.

I didn't publish the entry for it, but we really bonded a few days back, and she actually slept over, and we had extremely deep talks. We didn't have sex because she's very religious and doesn't want that before marriage, but we still cuddled a lot in bed together, holding hands with fingers intertwined, legs over each other, embracing each other with our arms. We breathed in each other's faces as we were sleeping and talked deeply and she smelled nice. The next day we woke up together, went shopping, she made lunch, embraced each other more, we talked so much.

3 days later, yesterday it was probably the 4th or 5th time I did something that really hurt her, and she had enough I guess. So she said that was that. I don't think she was always like this, but right now I think she just wants peace and my own personal issues keep destroying it for her. Anyway I also think it was a very minor thing, so if that really broke our chances of being in a relationship, then it would have probably failed at much grander obstacles.

Anyway Aloe and I talked a bit again this morning, I just sent her the entry I wrote about what happened yesterday which I wrote in Spanish. I basically wrote the whole entry barely using a translator except to find out some words. She critiqued it a bit and gave her point of view, which I added. And that was that. I think we were done, I don't know if I'll ever see her in real life again, but I want to.

The rest of the working day I just felt like I couldn't breathe. What was going on? Everything just felt so terrible. I went outside and walked for an hour in the sun shirtless. There were people that stared at me, some people smiled and chuckled, I laughed with them. But overall I was feeling so devastated. What I felt today felt very much like how getting fired felt, which I experienced back in 2018, and my world came crashing down. It feels the same, except today I think I experienced it far worse because back then I had my parents and some friends I could confide to about the unfortunate event that happened, now I had no one.

Work felt like drowning. No matter what song I played or whatever, I felt so constricted. Like I just wanted out.

So I finished up a few things for work which was all mandatory stuff I had to work on anyway. At a bit in the afternoon, I started talking to some Spanish friends on Facebook in Spanish, and talking to them cheered me up a bit. I can sort of converse in Spanish now.

It started getting cloudy and dark at around 4 PM showing signs of it about to rain soon. It rains here so freaking often, every day I think. It rains like 3 times a day. The day usually starts off as either rainy or sunny, and then it will change to the other after a few hours. It will start raining or it will be sunny for a few hours, and then it will switch again. That's how weather works here.

Anyway I just felt so overwhelmed and constricted. I wanted to cry so many times, but I can't. Every time I said "Quiero Llorar" (I want to cry), I really do want to cry, but I can't. I can make the most anguished looking face as if I were crying, but no tears come out. It's weird because I used to have an ability to cry at will back when I was a kid, all throughout elementary school, but now I can't cry as easily, even though I felt the most devastated today. It really felt like the worst day of my life.

After work I could not control myself. There was school studying and homework I had to do which I knew would probably take me 6 hours, but I said screw it and just went outside to drive. It was starting to rain, just tiny droplets.

I listened to some music and started singing along. There was a bunch of traffic on the road. After driving for a few minutes, I had this idea to walk outside in the rain while singing in front of all that traffic because it gives me some significance that I exist and that I'm not alone. I'm freaking alone here all day every day and it drives me crazy sometimes. The loneliness can be paralyzing.

So I went out and I parked at this shopping center, so I could walk outside around it and start singing. That was so much fun. I did this for like 2-3 hours, just walking outside in the rain, I did bring an umbrella, and just singing at the top of my lungs. I was so freaking sad and depressed and this activity cheered me up a little bit. I mean it made me want to cry more, but I also felt a bit more energetic and hopeful, so there was a big mix of different emotions in a whirlwind. I loved it.

Freaking Aloe, man, it was such a small issue. Why would you end it over that? Women end things so quickly. I remember when I was 16 and I had this penpal who was also 16, and this was way back before Facebook and other social media sites were that popular. They were always popular since inception, but they weren't as popular as today. Anyway we just emailed each other a bunch of times. I said one tiny comment that I thought wasn't a big deal, just some random thought that bore little weight on my actual thoughts and opinions, and she got so offended she just cut off all communication based on that one thing I said. Wow.

So anyway Aloe says we're still friends, so I hope we can see each other a few more times in real life. Seriously. I'm gonna give her a break for a while, but in like two weeks or something I plan on messaging her again to see if we can hang out again or whatever. We'll see.

On the way back to the car, and I wanted to sing outside for far longer but it was already getting dark, and I had to get back. It was almost 8 PM. I encountered this black bird on this fence here outside, I think they were too wet to fly or something, I don't know. But they allowed me to get very close and they didn't run or fly away. So whatever, I took a selfie next to them. Reminder to anyone reading this that we don't have to kill or eat any animals ever, there is no reason to at all, in any modern day situation. Choose compassion over unnecessary cruelty, it's really easy.

After that I got back in my car and I knew I had this homework still to complete, but I wanted to sing more. So I drove to Wal-Mart while playing music and singing. I was going to get a green smoothie and I had this thought of asking out the clerk girl there out.

Anyway I got to Wal-Mart and every young woman I saw, I saw as a potential date. Omg. I encountered a bunch of women there just walking around and I was like, should I go up to them and start a conversation and ask them out on a date? A lot of them weren't walking alone though, so it would've felt weird.

The woman who works at La Frutera, I don't know why she's always there. Like basically every time I go there, it's her shift. I went there again tonight, and she was working there alone. She's really hot, has a similar appearance and figure to Victoria Justice, like thin with black long straight hair with light skin. Yeah I would say she basically looks like Victoria Justice. I wanted to ask her out, but I go to La Frutera a lot, and if I asked her out then I know she would tell all the other clerks there "omg this Asian guy that comes here all the time asked me out, you've seen him."

I think everyone at La Frutera knows me now, I go there so frequently, each time I'm at Wal-Mart. And I have probably made the largest orders out of anyone. There was one time I ordered 4 smoothies and 3 fruit salads just for myself, just for one person alone. So yeah they all probably recognize me. I'm also the only Asian guy here. I've seen one other Asian guy the entire four months I've been here, seriously. I think I stand out anywhere I go. So I didn't ask her if she was single or for her number or anything, even though I really wanted to, because I didn't want to make things so awkward for a place I visit constantly.

Anyway that was that. I got the green smoothie, and I went back to the car, and I drove home. At home, I dropped out of the school course I was taking because there was no way I could complete all that studying and homework in time. I'll take the course again next term.

When I got home, I think I just got on Facebook. I read @Miya-Miya's latest entry here and posted a comment. Then I started working on my entry, but I was so tired and sleepy, I just went to sleep shortly after. 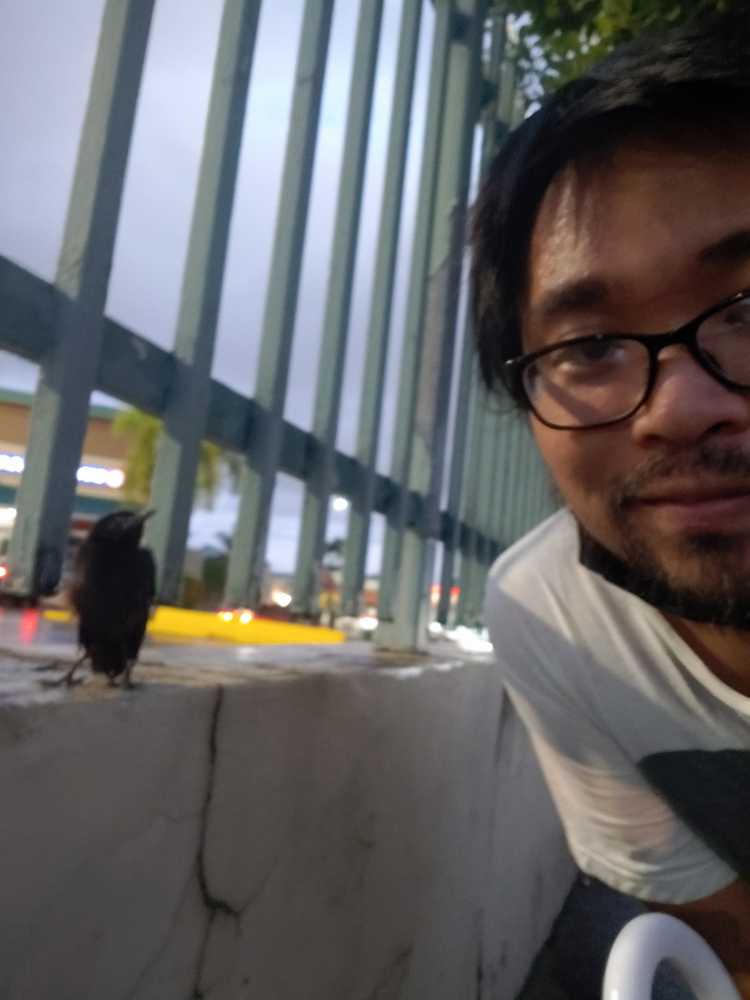 Hello my friend, I'm back to these jorunals (left almost ayearago to be honest xD) I remember you from some comments in my own journals so I read all this post. Seems like you're having a rought time my friend, I am sure it will get better and you'll get resolution, it might not seem like it right now but life is like music, always looking for resolution after tension chords.
I don't have to much to add in the love branch, but just hoping that you get better and actually offering another spanish friend that you can talk to jaja, I'm from Guatemala if you would like to chat anytime you can add me in facebook "y podemos hablar de muchas cosas". I'm in facebook like "Johanam Levi"
Loneliness is not good for anyone and it's great to find people you can talk to and understand you.

I always like your way of writing (you should start a blog or something) and I still admire your commitment to this daily journals and I will ask for some advice if you reach to me jaja.