I got a message from Iyazo on Facebook very pissed and mad at me, writing a long paragraph and calling me a homophobe. Uh, what? I don't hate gay people or whatever, I don't have anything against anyone's gender. So wtf? Did I make a post going around saying "Omg gay people blah blah blah"? No....

This is the paragraph of what I wrote, and the part that got @Iyazo angry at me is bolded:

I went out again tonight and just went to the highway bridge where I walk back and forth and just sang and screamed my lungs out until I was hoarse again. I was there for around two hours, singing as loud as I possibly could, walking back and forth. I was so frustrated I just let it all out. It takes such a long time to get my voice to become hoarse, I'm literally screaming at the top of my lungs basically, for two hours, and I am not getting hoarse. After that time though, my voice does become hoarse again, and I can barely hear myself speak. My voice becomes very breathy and I sound gay, without even trying, I just sounded like a gay person because my voice just becomes so breathy when it's hoarse. I went back home after that.

Next time I should probably just record my voice and upload it, because that's how I thought I sounded. When I spoke a sentence, I felt like I sounded gay, that's all, not that it was negative. Did I say it was negative? Did I say it was bad to sound gay? I intentionally sang for two hours to get to that state on purpose to sound like that. There's no reasoning with this person in any topic. Deleted my replies on veganism too when I would reply to them and their horrible logic.

Anyway, now they've gone around making super angry posts at someone that isn't even a homophobe as they claim. I could have just deleted that part if they asked, and would have had no issues, but whatever.

I think they should have replied to me more calmly like "Hey, I found this post offensive. Can you delete or change this part here?" But no, they instantly went on full hatred mode and started cursing me out and yelling at me and even making very negative posts.

Update: I found a video example of how my voice sounded after getting hoarse: https://www.youtube.com/watch?v=r0mlaJft5aE

This is the only example of a hoarse person talking on YouTube. My voice sounded very breathy like the guy in this video. Is the guy gay or homosexual? I don't know nor do I care nor do I have any hatred for him if he is, but I think his voice does sound that way, right? My voice sounded exactly like his. Also check out the 1:01 minute marker.

When I sounded like this, I described myself as sounding gay. That's it. Not that it was negative. Not that it was meant to be offensive. Way to get very offended at that @iyazo when I already apologized and offered to delete it and even said I meant no offense at all. There no reasoning with this guy on any subject at all.

He also tells me to "fuck off" while he spams me on Facebook and on this website and in my comments.

Update 2: So the "gay male speech" has been observed and studied. There is an entire wikipedia page for it that has people studying and researching this: https://en.wikipedia.org/wiki/Gay_male_speech

And a movie called "Do I Sound Gay" by a gay person came out too: https://en.wikipedia.org/wiki/Do_I_Sound_Gay

So what was there to get offended about? All I said was I sounded gay when my voice was hoarse and breathy, and that video I linked above is 100% an example of how exactly I sounded. Even gay people have made a movie on sounding gay, and it is even an observed and studied phenomenon. So wtf?

Due to how peacefully this could have been resolved, I think whatever angered Iyazo was far deeper than this simple little comment I made, they also had some resentment against me from earlier arguments, so it was easy to take all that rage out on me.

If someone else posted a similar comment, would they have acted the same way? I really doubt it. They probably would not have gone "You fucking raging homophobe, fuck off, fuck you" I understand that it's really me and other issues they are angry against, not specifically that one statement. 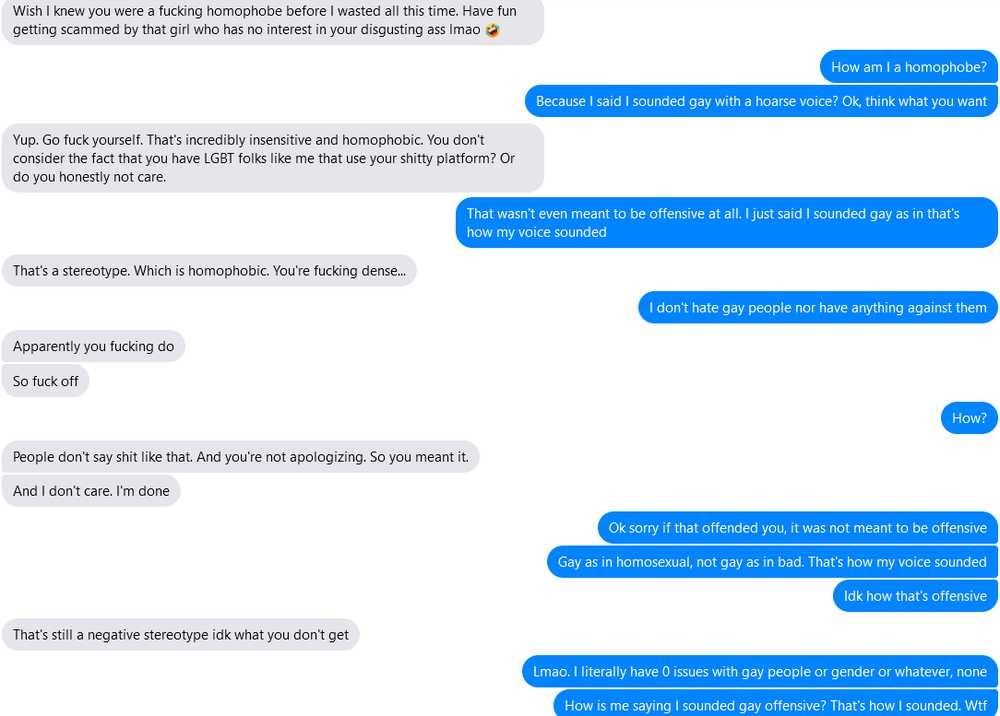 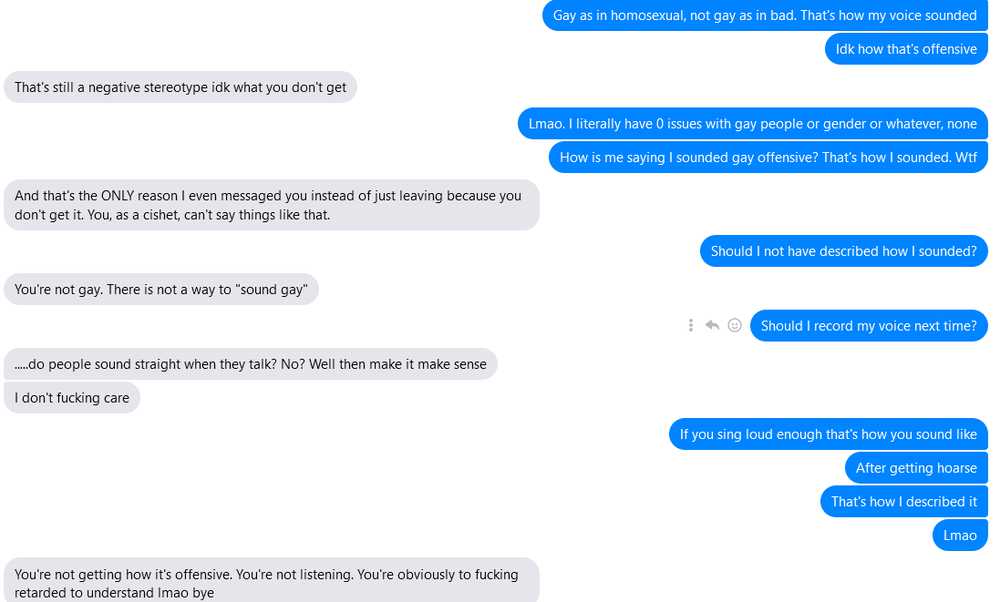 Oh yeah so just decide I'm in the wrong because I'm also not vegan which....you don't even know that for sure lmao. My lifestyle changed a lot since I moved and I never tried to justify eating meat as necessary to you so pull your head out of your ass for a second maybe

@iyazo I updated this post too. Check out this: https://www.youtube.com/watch?v=r0mlaJft5aE and go to the 1:01 minute marker.

Also are you dense? You called me dense but you literally said this: "you won't own up to the fact that you said something shitty and won't apologize or fix the issue."

When I ALREADY apologized, and I even said I would have deleted that part if you asked. Dude, there is no getting through to you, you even say things that go completely opposite against what happened.

@JustMegawatt you only offered to delete it after I said "I'm sorry you got offended" isn't a real apology. Go ahead and cover your tracks 🙂 Sure looks great.

@iyazo No, I was going to delete it if you asked from the start. You never asked me to delete it, not even now. Also that wasn't my apology, it was "Sorry if that offended you, it was not meant to be offensive"

The way I see it, stereotypes about gay men's speech are closely linked to negative/toxic stereotypes about gay men being effeminate, less manly, etc. There's just a whole lot of ugly baggage there. I get that you weren't trying to be mean or disrespectful, but because of all that baggage I would steer clear of the subject. Besides which, it doesn't really make sense. You could be attracted to men and have a deep baritone rumble of a voice, or attracted to women and have a breathy hoarse voice, it's just a complete non sequitur either way.

@Achaius yeah that's true. I'm not gonna mention the word gay in any entry in the future. I forgot to mention one of my closest friends on FB is gay, I gave him $300 so he could buy a laptop and we chatted a lot back when he had an account. He had a deeper voice than me, but he did that intonation sound or whatever that made him sound gay, like how the wikipedia describes. I developed that too when my voice was hoarse, like in the guy's video I posted.

@JustMegawatt @Achaius I have to agree that it is all about stereotypes, negative ones at that. I watched a few seconds of the video that you posted. To me, you don't sound as you described. Perhaps when you are listening to yourself you sound like that. I honestly believe that we all think we sound one way when we hear ourselves as we are talking and another in other formats, such as when we hear ourselves leave a message on an answering machine or watching a video of ourselves. (I dislike hearing myself in recordings )

A final thought, the use of retarded. I know you didn't say it, that has negative stereotypes attached to it as well in modern terms. So it is tit-for-tat in the end. https://en.wikipedia.org/wiki/Retard_(pejorative)