It’s hard to imagine the many months of quarantine where pacing on my balcony for half an hour was often the highlight of my day. Now I live a life of luxury, going outside whenever I want. In the afternoon I take a leisurely ten-minute walk down to the nearby church to get my pokestop of the day. Gardens and sunlight and fresh air. It’s the best.

As of August 1, Niantic has removed the doubled gym and pokestop interaction radius, so I have to cross the street to spin the gym. It’s very rude. Apparently no one at Niantic got the memo there’s still a pandemic going on. And even if there wasn’t a pandemic, it was an incredible quality-of-life upgrade that in no way impeded the game designers’ goal of getting people to explore the real world. Very disappointed in Niantic tbh.

In the evenings, Dad and I often go for a drive and hit up the local pokemon gyms. Today, we went to the local forest preserve because he needed me to kick his pokemon out of H.I. Gelvin Bell Tower so he could get his 50 coins. (I’m Valor. He’s Mystic. This town is basically Mystic territory; in yesterday’s legendary raid hour there were like 12 blues to my lone red.)

There were five pokemon in the gym: Rhyperior, Gyarados, Slaking, Dad’s Salamence, and Flareon. All had been there for around a day and a half, but they were at full CP, so it was clear someone had been feeding them berries. I went through a couple rounds of battling, and then they were all back at full CP again. Someone was feeding them in real-time. I thought he might go away after a few more battles, but he just kept feeding them.

Initially I thought I might get the jump on him by repeatedly battling only the Rhyperior and kicking him out. But nah, he was too savvy for that, he made sure not to let the Rhyperior drop. Well, fine. I can be very patient when I want, and I know there’s a limit on berries: after you feed ten, the pokemon gets full and won’t eat any more. So a prolonged battle could only be in my favor. I got out of the car and walked back and forth in front of the bell tower (might as well get some steps in), and I continued battling while he continued feeding.

After around half an hour of this, he either ran out of berries or gave up. (He might have hit the ten-berry threshold on Rhyperior and Gyarados, the main two I was fighting. The others were certainly not maxed.) I gleefully kicked all his compatriots out of the gym and put in a shiny sunglasses Squirtle. Then I got back in the car and we drove off into the sunset. 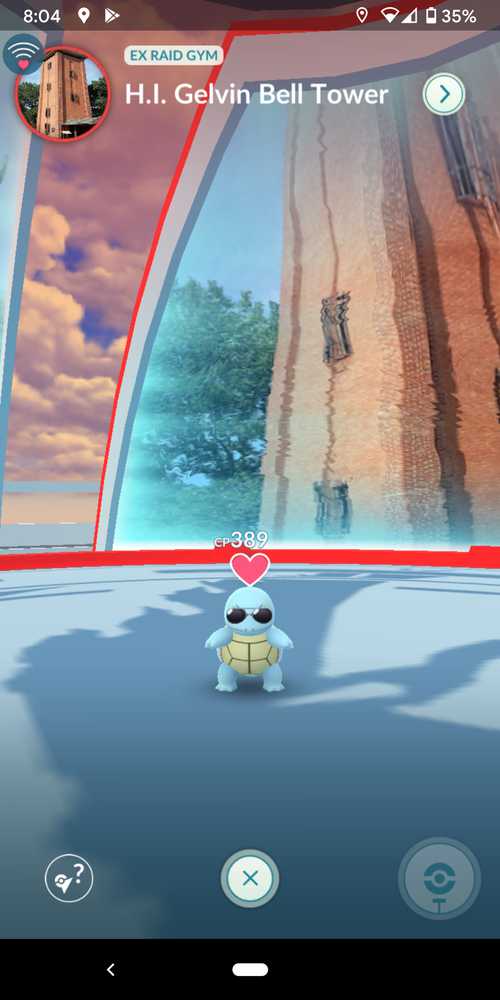