I got woke up this morning by my sister-in-law texting me. I couldn't ignore the insistent pings in case something was wrong, but it was just her barely coherent ranting out of boredom and I guess concern for one of her kids that got dumped. I think. Her texts are garbled so I'm not really sure.

The thing is I don't have the physical or emotional energy to deal with her, especially not at 8:30 in the morning--before coffee--when I normally don't get up for another hour. I love my husband's sister, but she's a chaotic disaster and now I'm exhausted without ever doing anything today.

That's the thing with my chronic illnesses... they tire me out with me having to do anything physical. They're completely hidden. Internal. But they affect me the same as someone working a twelve-hour shift or running a marathon. Literally going downstairs to make coffee wore me out for a good fifteen minutes. Sometimes getting out of bed is such an exhausting thought, I'll lie there in the morning until I'm about to pee my pants. But then I'd have to change the sheets and flip the mattress, and that's even more work so I force myself to get up.

A couple years ago, I wasn't this bad. I'd always been tired as a state of being which was assumed to be related to my mental illnesses. Depression, especially leaves you lethargic a lot of the time. But in the past, I still managed to take care of my family. I tied up the house every day, cooked lunch and dinner, took care of the kids, did laundry, managed to do a little writing and watch TV, etc. Normal stuff. It was exhausting, but I did it all because it's what I had to do.

After my nervous breakdown in 2011, I pulled away from constant socializing with the family (there was just too much chaos with five kids in the house for my brain to process all of the time), but I continued to do the chores and cook. Heck, in 2015 (I think it was), I decided we needed some new recipes and spent about four months cooking almost every day, mostly from scratch. That was despite having walking pneumonia and being in school online at the time.

But since then, I noticed the energy to do stuff like that slowly evaporated. I did less and less around the house. It was at that time, my meds for my mental illnesses stopped working as well. We began trying all sorts of drugs, but nothing was helping. Then in 2018, I finally had some blood work done that showed I had severe iron deficiency. Severe. Like how are you even able to get up and move around with so little iron circulating oxygen in your system? You should be dead.

I was put on a bunch of different supplements (iron, calcium, vitamin C and so much vitamin D the pharmacist was sure it was a mistake). What I found was iron pills make me violently ill after taking them a few days. I tried to keep taking them, but I still have almost a full bottle of them because I would get so sick, all I could do was curl in a ball and try not to vomit all day. Didn't matter if I took them with or without food or what time of day. I would be so sick, I couldn't do anything but cry.

2018 turned out to be a crap year. My husband and kids went behind my back to get a puppy after I repeatedly said no because I don't like dogs and also here's a list of like 20 other reasons it's a bad idea including no one will want to clean up after it, it would destroy the house, we can barely afford the cats we have, and oh, yeah, we already have four cats that aren't fixed and keep having kittens. It was a very long list. They got the puppy anyway with promises that I wouldn't have to do anything. Two days after getting the dog, I was the one up in the middle of the night to let it outside because the kids had school and my husband left for work at 4am.

As the months of 2018 dragged on, the responsibility for the dog fell on me more and more. I had to get up early every day to take care of her. I had to train her because my husband and kids would only lock her in her kennel when she misbehaved. I had to clean up the yard and feed her and take care of her all day while they were at school and work. It was absolutely exhausting. We got the dog in February and by October she was still completely out of control, tearing my house up, the kids were terrified of her, the cats just fought with her, and I was beyond exhausted. I remember sitting on the couch one morning just crying because I couldn't handle it and it wasn't fair to the dog to be locked in a kennel all day.

We rehomed her not long after that (and I still carry the guilt of not being able to train her so that we could keep her because she was sweet, but she deserved better that what my family could give her) but the exhaustion didn't go away. It just got worse. I thought it was the depression. I talked to my mental health provider in January of 2019 because I wasn't getting better. He told me there weren't any other drugs I could try, sorry. And told me to go to therapy. I hate therapy (see my post about mental health) but made an appointment because I figured I'd need something to help me cope with the fact that I'd be living with this extreme exhaustion and depression the rest of my life since there were apparently no drugs to help me.

In February, I also had another doctors appointment to get more blood work done for my anemia which wasn't getting better since I couldn't handle the pills. My doctor suggested my only choice might be an iron infusion. She ordered a lot of extra tests just to be sure there wasn't something else wrong.

I have no idea the results of those tests. I never made a followup appointment because I got super depressed when I arrived at my therapy appoint to find out they canceled it but never told us. I fought through all of that anxiety for nothing and just gave up on everything for months. Then we temporarily lost our insurance so I couldn't get treatment even if I wanted.

And when we finally got our insurance back earlier this year, my appointment was canceled because of the pandemic, and then I was dropped from the practice and forced to find a new doctor and start all over.

So here it is two years since being diagnosed with severe anemia and still dealing with the extreme exhaustion. Chronic fatigue is one of the symptoms/side effects of iron deficiency. A lot of my symptoms line up with anemia. Everything made sense even if I couldn't do anything about it. I try to eat more iron-rich foods and tried pills that were supposed to be easy to digest. The fatigue has not gone away.

If anything, it's gotten worse over the year. Last summer, I managed to go for walks most days while playing Pokemon Go. It was about all I could handle. If I went for a walk around the neighborhood then I wasn't doing anything else the rest of the day. Now I can't even handle walking down the stairs, let alone down the block. Grocery shopping requires a nap after. I usually save all my energy so I can cook dinner most nights. I don't clean or play with the kids or do anything else. And sometimes doing nothing is also exhausting.

One of the hardest things to deal with is the judgement by other people because this illness is "invisible." Besides my obvious obesity (thanks depression for causing me to overeat), I look normal. You can't see the chronic fatigue that leaves me worn down like I worked a double shift just walking across the parking lot. So, yeah, I left my cart on that island in the middle of the lot instead of returning it to the corral. I didn't have the energy to walk back and forth again and still safely drive home.

Oh, but I don't drive anymore. I can't trust myself because of the fatigue. It makes my brain so foggy, my thoughts so jumbled, my reflexes so slow, that I can't safely do it anymore. I'm now dependent on my husband to go anywhere and he's the only driver left in the family. Not that it matters much now with COVID-19 keeping us at home and me not having energy to do anything.

The brain fog is one of the worst parts of the fatigue because I have a hard time doing anything. Cooking takes twice as long because I lose track of what I'm doing and will reread a recipe dozens of times without understanding any of it. I've burst into tears trying to read a story because nothing makes sense. Reading is as mentally exhausting as taking walk is physically exhausting. Which means I also can't really write (that's why these entries are rambling messes). Even watching TV/movies is too much for me to understand sometimes.

So now my depression is worse which makes me more tired which leaves me more foggy and... it's a cycle I'm stuck in.

Yeah, my sister-in-law is still waiting for me to answer her last rambling text except I don't even know what she's talking about. I'm so tired, I just want to go back to bed even though I just drank half a pot of coffee. I'd love to get more coffee, but I have to weigh the energy expended going downstairs to get against any perks of the caffeine. It doesn't really help so is it worth it to waste the energy?

These are things I have to consider every day. Every time I need/want to move from my chair. It's no way to live.

Sometimes I wish I wasn't alive because it's exhausting as hell.

*picture of the puppy, Ella (or Marvella as the kids called her) when she was about 3 or 4 months old 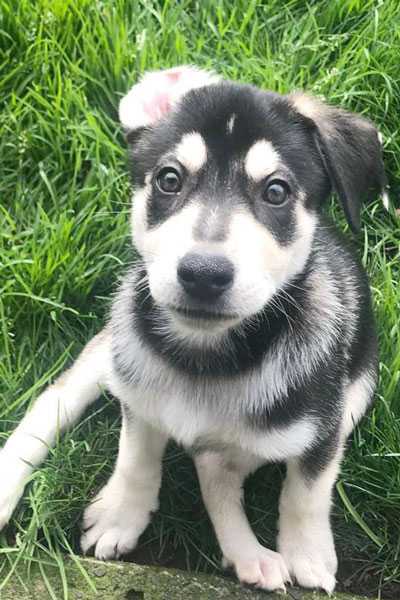