Very Sleepy After Little To Do

The title basically says it all. I'm just so sleepy right now. I can't focus on anything. My eyes keep sliding shut or crossing. But it's after 6pm so it's too late to take a nap. I have to try to stay awake until bedtime. It's really hard because I also can't really do anything. I can't read because nothing makes sense or I literally can't get my eyes to focus so I can see the worse. I can't pay attention to the TV. I either start to drift to sleep or my mind wanders, leaving me to rewind constantly so I can figure out what's going on. It's all so frustrating.

If I take a nap now, I'll sleep for a couple hours, wake up just as tired (probably with a headache) and then be up until 5am, throwing all of tomorrow off. I can't win.

I did get to go to Walmart today, finally. I picked up 15 skeins of yarn plus some other things I had been wanting to get. My anxiety was through the roof, though, because there were so many people around. I kept forgetting to check the direction arrows on the aisle and feeling bad for going the wrong way, but like I literally couldn't keep track of everything. That's how bad my brain is when I'm fatigued. And I wasn't even that fatigued while at the store. But between trying to remember everything I needed to get, staying away from people, trying not to touch my face/mask, and talking to my husband... it was very confusing and exhausting.

I'm sure "normal" people probably wouldn't get it because it's just shopping. A couple years ago--even a few months ago--I would have just decided to focus on the task, pushed through and been fine. Now, though... everything is so difficult. If my husband hadn't been there, I probably would have wandered aimlessly because I wouldn't remember what I needed or how to find it. And I definitely wouldn't have been able to drive myself home. Physically, I felt fine, but obviously, my mental ability had diminished in just the hour we were in the store.

I mostly felt okay until after I ate lunch. Since then, I've been dragging horribly. I was planning on making these chicken parmesan sliders the family likes (I don't care for them, but I have leftovers), but when I went downstairs, the kitchen was a mess after my oldest prepared a picnic for her, her ex-boyfriend, and their son. Thankfully, the 17yo is home again and helped me clean it up. I was even more annoyed because I had cleaned up the kitchen the other day while babysitting, and it had been mostly clean when she started (just a few odds and ends out from the 17yo making breakfast). The oldest left dirty dishes on every single counter. And then I found out she wasn't even coming home tonight--she's just going to crash at her ex's place, go to work tomorrow (their house is closer to her job than ours) then come home tomorrow with the baby. She literally left the mess for us to clean up. Ugh.

By the time we collected the mess and put stuff away, I was just too worn out physically and mentally. I couldn't even remember what I was supposed to be doing let alone a complicated recipe. Also, realized there was just three people to eat the food. I'm sure they'll find something. The 17yo said she'd just make another sandwich and the 10yo would rather eat fish sticks or chicken nuggets.

I used to cook all of the time. For awhile, I cooked pretty much every other night, and a lot of it is from scratch. Now I try for a few times a week, making enough to have leftovers in between. Hopefully, tomorrow I'll be up to it because we bought the rolls for it sometimes last week and they need to be used.

Well, it took me over an hour to finish writing this as I would forget what I wanted to say or what I was doing while distracted by incoming Facebook messages. Like twice I literally forgot I had even started this then thought, "I better get that illness journal done since I'm so sleepy," only to suddenly remember, I'd started it forever ago and forgot. That's my life in a nutshell. 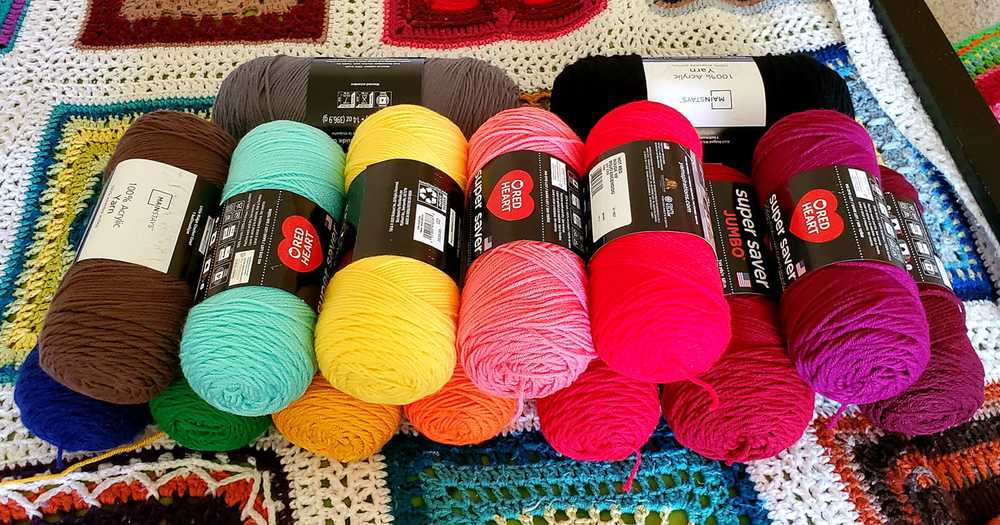 I really like the picture 😍 The colours are amazing and so bright! The orange yarn looks like It's trying to escape to the left 😂
And because of the supermarket: yeah, It's so strange these days. I also fond it hard to keep distance while getting what i need. And then the rows are not that big (who plans a pandemic when planning Supermarkt interior 😂) and then you are at one place for a long time, unless you ignore distance for a second. I was with my sister at Ikea the other day and there were also surprisingly many people... When we got out of the shop some even didn't keep distance to us 😒 But we got Ikea shark plushies 😂