Another Day of the Same

Not much to report tonight. Still feeling okay energywise. I mean, it's not great. I'm not back to normal. I haven't started cleaning the entire house every day like I used to, but this is so much better.

I spent the morning knitting then around 12:30 (after ordering pizza for my husband to pick up on his way home from work), I forced myself outside to pull weeds. I had meant to go out much earlier, but just kept putting it off and putting it off. Of course, by the time I get out there, it's already getting hot outside. But I suffered through that and managed to spray the areas I cleaned up yesterday, swept up the debris I washed into the street to dry (I didn't want it all going down the storm drain) and then pulled weeds on the raised part of our yard in the front (what I couldn't reach from street level).

I finished the front and started moving to the side of the house but then realized the bush next to the porch was getting so overgrown, you could barely walk on the path and right across from it is a very prickly evergreen bush (not fun to bump into as you're avoiding the other bush). So I cut it way back, exposing the inner branches. It looks ridiculous, but I think the leaves will grow back in eventually. Then I spent a good twenty minutes just cleaning up leaves and branches from the bush.

At that point, my husband got home with the pizza which meant it was nearly 2:30pm. I got them in the oven then moved everything off the porch so I could spray it down with the hose like I did the driveway before. I worked at that until my pizza was done.

After I ate, I went back to knitting then finally took the bath I've been meaning to take for weeks. I scrubbed myself raw with a pumice stone I bought. Actually, I went a little to crazy. A few spots actually hurt and I gave myself a blister on my one thumb. Oops. I'll survive, though, and now all the gross, dead skin is gone so I feel soft and smooth if a bit scratched up.

Not sure if I'll do more yard work tomorrow. I need to run by the bank to activate my new debit card and go to Dollar Tree to start collecting the stuff for back-to-school. I might just knit, though, so as to not ruin the cleaness of my skin, lol. Doing yard work will just make me sweaty and gross again then I'll have to take a shower. Hopefully, I can get to Walmart and Costco on Friday to see about the groceries and the rest of the stuff I want to get for my son's virtual school nook I'm trying to create.

Oh, today marks the 20th anniversary of my mom's death. I tried to keep busy so I wouldn't think too much about it, but she's never far from my thoughts. Even after twenty years.

*picture of my mom and her sister (Nora) the day of her surgery--August 17, 2000. She had a massive stroke while on the table and was declared brain dead two days later. This was the last picture taken of her while she was alive. 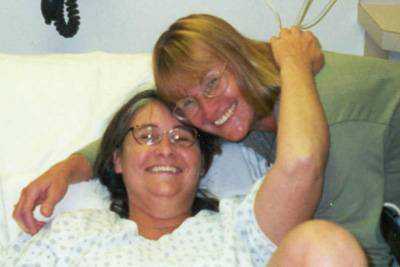