I seem to be back to getting up early and maintaining energy all day, although, I started to get sluggish around 2pm today. I had planned to go start dinner early (my husband got home and was hungry) then clean up the backyard so I could sit out there, but I was just too tired to motivate myself. My husband told me to go rest.

I was already frustrated because I didn't get much done today. I got woke up a little after 6am by my grandson screaming and pounding on the bathroom door because his mama was in there. Then I only had one giant cup of coffee (that seemed to be the deciding factor today--maybe if I'd had more, I would have felt okay at 2pm). I had planned to clean the kitchen, but by the time I went down there, my daughter was making a giant mess so I just grabbed my coffee and went back upstairs.

Instead, I pulled everything out of the hall closet to organize it. It's supposed to have linens in it--bedding and towels for the kids--along with clothes being stored for future use by other kids or because it's out of season. Most of the clothes in there, though, were for donations. And the bags they had been in were torn open so clothes were everywhere. It had been like that for a couple years--clothes just piling up more and more. So I cleared it out.

Of course, now my hallway is full of boxes and bags of clothes that need to (maybe?) go to Goodwill. I can't really do anything with them until the girls go through it all and make sure I didn't accidentally toss in something they wanted to keep that got mixed up with donation stuff in the closet. But daughter 1 was busy with the baby and painting, daughter 2 is MIA and daughter 3 was sleeping. I gave up and just left it all in the hallway.

I worked on my cross stitch for a while but then got antsy because I hadn't finished the hall project. But since I couldn't actually work on it, I tried to clean up my bathroom which hasn't been done since like May (GROSS!). I managed to clean the sinks, counter and part of the toilet. Also cleaned the litter box and emptied the overflowing garbage can. But that's it. I started feeling worn down after that. I still need to clean the tub and shower but we're out of shower cleaner (also used the last of the toilet bowl cleaner) and sweep/mop. There's cat food and litter all over the place.

Mostly, I spent the day working on the cross stitch, and when it got too dark to see the stitches, I switched to the Harry Styles ugly sweater project which I need to focus on to have it done before school starts on September 2.

My goal for tomorrow is to at least put up the donation boxes even if the girls don't sort them. I can't physically take them to the donation place right now anyway (it's closed due to the pandemic) so I want to move them to the mostly unused cabinets in the laundry room for now. I also want to spray the weeds in the part of the yard I finished working on. And hopefully clean up the kitchen (although that might wait until my daughter has work so she's not in there making a mess). I'm not super worried about my bathroom--it'll be a bonus if I get more work done in there tomorrow.

I'll probably just work on the cross stitch, though, because it's so relaxing 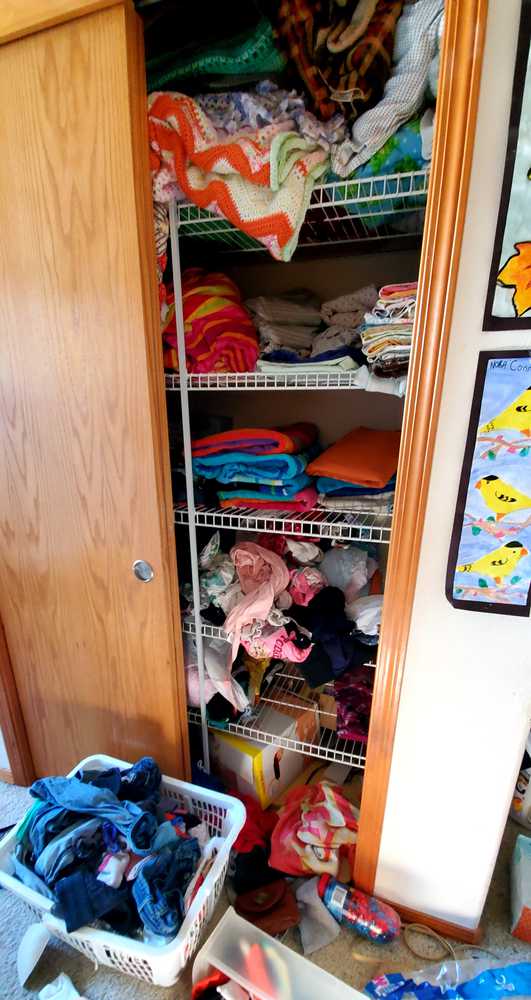 @AthyAri Yeah, we've tried stuff like that. It's just more work for me as I spend all of my time making sure they're doing their chores. Easier if I just do it myself.

On the other hand, my 17yo and 14yo daughters do a lot of cleaning around the house, especially the 17yo. She'll get into a cleaning kick and do the entire house top to bottom (usually to avoid doing school work). She just hasn't been home for a week and that closet has just been getting stuffed with stuff for years because there's nowhere else to put things. I still have to wash the clothes that were covered in cat hair, but the closet it all organized now and even has a couple empty shelves. I'm sure the kids will have it destroyed in weeks.

@AthyAri I'm a stay-at-home mom so I'm expected to do all of this. The 20yo was arguing with us the other day about how the 10yo never does chores and she had chores at his age and how we're spoiling him or something. I got fed up with her attitude and told her she's the reason there aren't chores because after fighting her for years, we gave up making anyone do anything. It's not worth the stress. She has severe mental illness and had severe behavior issues (most likely oppositional defiance disorder). Getting her to do anything when she was little was impossible and even now, at 20, she does almost nothing around the house. Her excuse is she works and has a baby then complains because we don't clean up after the baby (like the high chair doesn't get cleaned or whatever) and is mad when we tell her it's her job to take care of her kid. She lives here rent-free, eats our food, uses our water showering sometimes twice a day because of her jobs plus all the laundry she does... Everyone is on edge because of her and has been for the last decade.

I guess my husband told her to find somewhere else to live since she's always complaining about how the house is run and looks but doesn't contribute anything. That's why I just stay in my room. I can't deal with it. I don't know what I would have done without the 17yo the past year. She cleaned the kitchen yesterday while we were out working in the yard. Then I made a mess while cooking dinner. I cleaned most of it up but was too worn out to finish. Now I feel bad that all of her hard work was ruined.

That's like the difference between me and most of the other kids. If I make a mess, especially after someone just cleaned the space up, I do my best to clean it back up when I'm done. My other kids just leave the mess for me to clean up because they don't believe they should have to clean up after themselves. Which is partly my fault for not enforcing rules when they were younger. I just didn't have the energy to expend on it and gave up.

@AthyAri Yeah, it's been a thing forever. I'm constantly telling them that--I'm not their maid. They're all just self-centered and lazy which they get from watching my husband. I mean, it's not all bad because he also doesn't care if the house is clean. So it's not like he's demanding I do everything while he sits around, lording over us. He just doesn't care. He lived alone for about 3 months when we moved out here. When me and the kids finally joined him, he had destroyed every room in the house. There was trash and dirty clothes everywhere. Both bathrooms were gross because when the first one got dirty, he just started using the second one instead of cleaning the first one. He acts like he's 12 instead of 44. Sigh. He does do some stuff. He finally started picking up some of the slack when I got too fatigued to do anything. So he'll do the dishes if they've piled up or take out the trash. And he's always been great about letting me do whatever and not having to take care of the kids all day. Like when they were little, he would get home from working a 16-hour shift and tell me to take a nap because I had been home with the kids all alone. We've been married 20 years so I'm used to this. It only really bothers me when my mood is off. When I'm not depressed, it's like I can ignore all the nonsense, get the work done and it won't bother me. When I'm depressed--every little thing is exaggerated. Unfortunately, I've been in a constant state of depression for years now. Ugh.