We got maybe 6" of snow, not very much at all. Friends of mine all seemed to have gotten more than we did here.

Found out that my creepy stalker ex, Darci, had been in contact with my other ex, Tori, who is still a friend of mine. She told me that they were asking for tarot readings and information on how to get with (surprise) another ex of mine who I had lived with for several years and who used to be my best friend... (Jon). It was all very weird to me. She said it happened in July, which was well after I had moved out of Darci's place (Jan/Feb), around the time I was shuffling my things around in storage and was staying on another friend's couch. Apparently Darci thinks that Jon is their soulmate and they did a lot of digging around and it sounds like their creepy infatuation for me shifted to him and apparently he already turned them down at least once, which I'm not surprised about.... (Would you date the last person your ex slept with?) Very strange....

Anyway other than that I tried to have a productive day, but I was just very tired so I didn't get much done until late. I finished a full page of documentation for the things I plan to sell and I did pricing research for the rarer collectables. It's hard for me to justify keeping a bunch of stuffed animals and figures around the $100 range when I could really use that money for a new laptop... Plus I'm really short on storage space so I don't even get to see my full plush collection. Some things I want to hold onto longer because I know the price will keep going up, like my BAB Flareon with cape which is currently at a nice $150~ Things might be a bit more expensive because it's the holidays though. I'll be selling things mostly after all of that so I'm not sure how it will affect things. There are some shipping supplies that I still need and a ton of pictures I need to take, but I think I made a good start. Beginning something slowly is the way to get past my executive dysfunction disorder.

Tomorrow I have to get up early for therapy and then hopefully I can get some pictures and list my first few items. I don't want to list too much at once and overwhelm myself either. I wonder if Michael would take me out to the store tomorrow or sometime soon. My aunt gave me a bit of money for the holidays and I'm thinking about buying another fold out table to use as a desk and throwing away the falling apart one that I have. I've been wanting to move my computer over so that desk is beside my sewing desk because they share a chair. As it is right now my monitor is set up in front of my TV with my computer tower behind it on the kind of table I plan to get another of. I sit on the edge of my bed and use a fold out tray for my keyboard and mouse. It's....not the worst setup I could possibly have, but it's not ideal. My back ends up hurting if I sit here for too long.

Edit: Added my finished fursona reference for this year! There is a NSFW version, but I won't post that here :3c 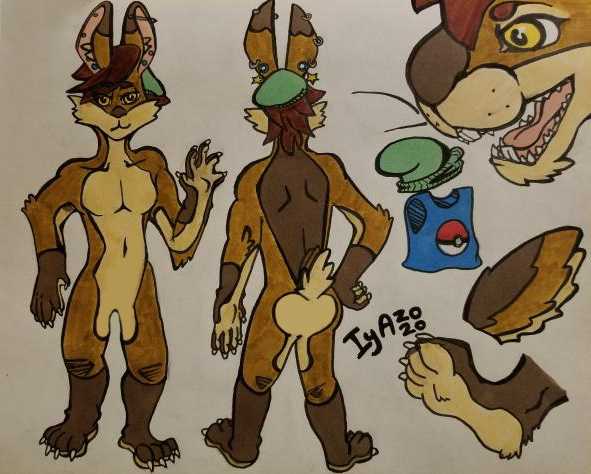 We got similar amounts of snow, around 6", and then mid-way through snowing, it started raining (temperature got too hot, went above freezing) which melted a bunch of the snow.