Today my goals were to dye my hair, get the pictures I took onto my computer, and to just in general try to relax a little. I think I've succeeded at all but the last one so far haha

I got up today and the house was quiet and the bathroom was cleaned up so I decided to re-dye my hair. It came out a little more pink this time, it's closer to what I was going for.

I got my sewing machine oil in the mail today so that I can hopefully maintenance the machine myself and not have to take it to a repair shop. I really hope something's not wrong with it that I can't fix because I don't even know where a repair shop is around here, only where my old one is an hour away....I wouldn't go all the way there... I just want to sew again.

It was harder than expected to get the pictures from my phone onto my computer. For some reason my phone doesn't like opening things on my computer so I can just copy everything over, so I had to go through google drive instead. I guess my phone is out as a camera and my new tablet will be replacing that function as well...

I spent about 6 hours practicing Japanese and studying today. I like Duolingo, it's simple and pretty fun. I'm remembering a lot of the stuff that I used to know. I only stopped because I needed to recharge the tablet's battery, but I got to the last section of hiragana and then I'll move on to katakana, which for some reason I remember struggling with before. When I stopped studying I was in first place, moving up from 5th. I ordered the old books online that I used in Japanese class and I plan to do the workbook studies as practice as well, whenever they get here. I'll probably forget I ordered them by then. I kind of want to start practicing other languages too at the same time. I don't want to get overwhelmed though.

Hopefully tomorrow I can get back to my regular workout routine and begin posting that stuff on ebay now that I have everything I need for shipping. Today I felt too tired and sluggish because I didn't sleep very well. I woke up to my computer being off (I sleep with headphones on, listening to ASMR) which was odd. It had been bitching about running out of file space and I couldn't figure out why. There's really nothing on that computer anymore. I ran a boot scan and there was a trojan so........ yikes. I don't know how that got there, but it was probably there for a while causing problems. Now it's gone and my computer seems to be fine, no weird memory errors.

I managed to rely on vaping less today, which is good. I felt less stressed overall, despite having to deal with the cats because I was downstairs in their space. It was mostly just Mister talking to me and rubbing on my legs. I can't be mad at that fat bastard. Speaking of fats I cleaned the cage of my rats and now they're lumping all over the place, loving the clean fleece and paper bedding. They went from watermelons to dinosaurs and rainbow fleece. 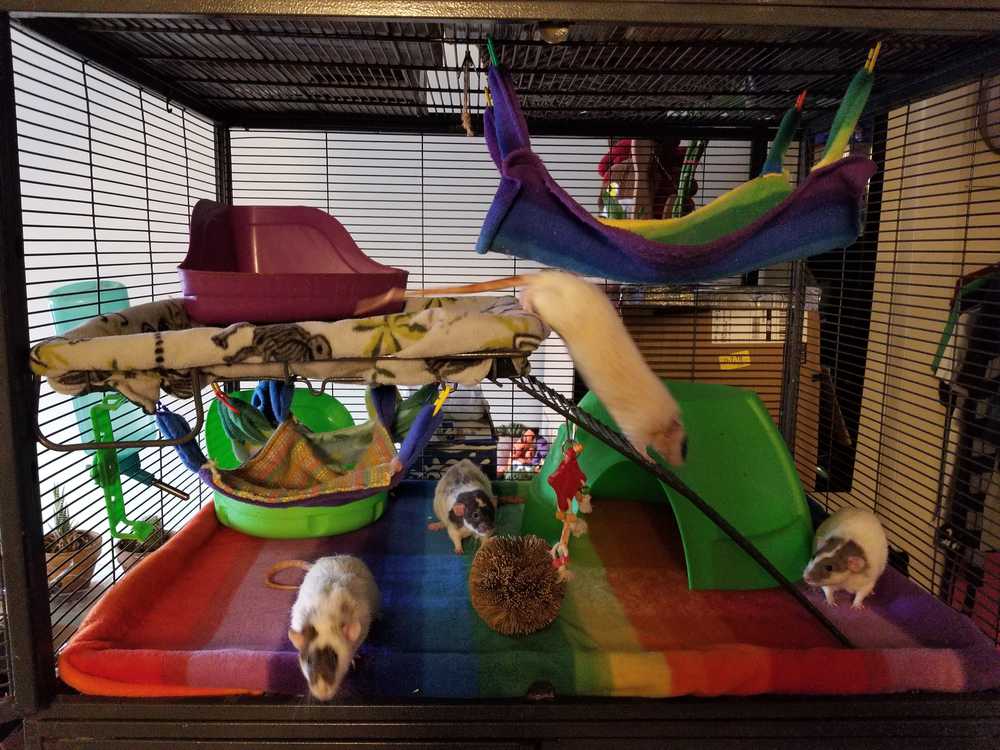 your rats are so cute as always. sweet cage setup too

@Achaius Thank you! I make all of the linings and hammocks myself :) They were a little unsure of the hammocks at first, but I've started to see them get used more recently, so I'm glad.