Yesterday wasn't bad. Glitch and I walked to the comic shop and back. I got a bunch of toploaders in a nice pokemon box for free from a nice guy who dropped them off for me because the store doesn't carry them. That was super nice. Saved me like $30... for some reason toploaders are suddenly hard to come by and expensive. Makes me think I should sell other things before my cards because no one is playing right now due to covid... I've actually gotten some new cards recently and have been wanting to play again.

Yesterday Tony and I had a big gay awkward moment. I had asked him if I could borrow a charging cable for my vape because I lost the battery charger and he comes upstairs in his bathrobe (and damn is he hot) and he asks me slowly "Anything else?" so I asked if he would like to hang out with me. I could tell he really wanted to and he was glad when I asked. Neither of us really knows how to talk to the other, but apparently we've each told Glitch that we find the other attractive, which she loves pointing out whenever possible. We got along fine though and binged through a little of Black Butler because I had never seen it. It has big gay vibes and I love to see it. We hung out until 10 which is when he goes to bed to get up early for work. We've planned to watch the rest of it later on.

The Skaven starter army that Glitch got for me came in today. They're walking home with Tony around 4 and we're going to spray paint a base coat across the sprues. I'm pretty excited to start painting again. It's been a long time. I've been delving back into the arts a lot though recently. I think it's been good for me. I've drawn more these past few months than all of last year. I guess getting the tablet was a good idea. I'm thinking of trying to use it to list my stuff on ebay since the camera is probably as good as the one on my phone, maybe better for all I know, honestly. Wouldn't hurt to try it out. I just can't get the energy today. I guess walking a few miles took more out of me than I thought it would. My back was in horrible pain for a while going to and from the comic shop, but we had no choice but to walk. At least it wasn't too cold out with all the layers I had on. Glitch lit me borrow their leather jacket and they think it looks cool on me. I have to get one and put rad patches on it like hers.

....I also need to shave my face.... I just touched it and it's a little scruffy, ugh. I hate it. I just don't have the energy to deal with it right now though. Dealing with dysphoria while having chronic fatigue is impossible.

Edit: Glitch is here now and brought me a beautiful bouquet of red and pink roses and lilies (at least I think that's what they are) I have a diminished sense of smell, but I can smell them, it's lovely. A bit too cold this evening to go outside and prime my warhammer figures so maybe tomorrow. Right now I'm relaxing while Glitch spends time with one of the kiddos before he has to go back to his father's house tonight. I'm glad that Glitch finds time for all of us somehow even if it's only a little bit. That was part of the household arguement lately is that everyone wants to spend time with her (solo or we would totally all just hang out together) 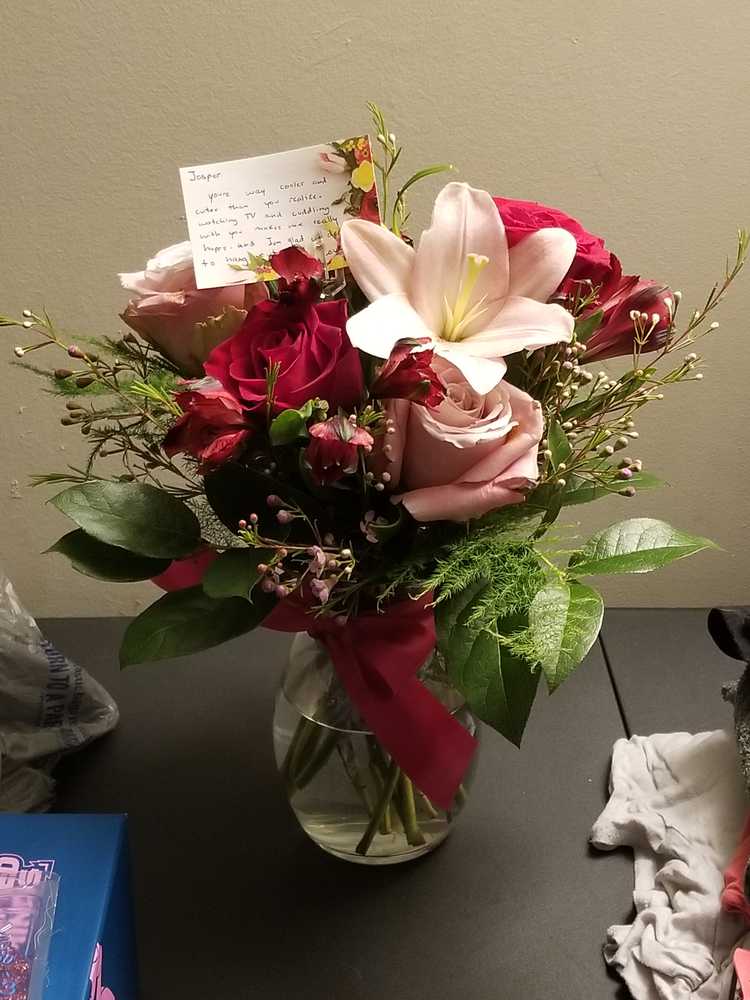