Happy 4th of July to the Americans out there. Although there doesn't seem much to celebrate these days.

I don't really care for holidays especially since my fatigue has gotten so bad over the years. I think it's because I have this picture in my head of what I want to do for the holiday, but then reality comes storming in and wrecks it all. Because I can't do the things I want like decorate the house and make big meals with all the family over. Even before the constant fatigue, we just didn't have the money for the things I wanted.

On my blog I posted an old picture of my kids on the 4th. I still sort of remember that day in 2011. It was one of the last times I was able to get the kids all dressed up and take pictures of them. We used to pick up the cute novelty shirts for the different holidays from Walmart or Target. They had a huge collection. Or we'd get themed outfits for those special days. They loved dressing up and taking pictures until my oldest became a teen and was too cool to be around the family. She was eleven in the picture and fought me over getting dressed up but eventually put on a blue shirt I had gotten her the previous 4th of July (or maybe it was for Memorial Day).

I remember I had to get the baby up (he turned one a couple weeks later) and dressed and convince all the kids to put on their cute outfits. I'm sure I cleaned the kitchen and made lunch and straightened up the rest of the house. The yard had already been mowed (by me) and the patio was ready for grilling and eating out in the sun. Then we did the photo shoot and I grilled burgers and hot dogs and we watched movies and hung out. And that night, we sat in the yard and watched the neighbors shoot fireworks. It was a long day, but at the end, I'm sure I cleaned up from dinner, put all the food away, loaded the dishwasher, cleaned the counters, put the baby to bed and sat down at the computer to write some fanfic or whatever.

My life is so different now. Number one being half the kids aren't even home. My grandson spends weekends at his dad's house so my oldest daughter is there, too, so she can spend the day with her son (she isn't with the dad anymore). My oldest son hasn't been home for more than an hour since the state went into lockdown in March. And my middle daughter probably went out drinking or something last night. Who knows when or if she'll be home today. That leaves the youngest two kids, and the 14yo said she isn't celebrating the 4th because the country sucks right now and doesn't deserve a celebration. And the almost-10yo? He's on the computer obsessed with some new game. Sigh.

I have plans to cook tonight--Philly steak sandwiches, corn on the cob, fries and mac & cheese. So far today, I've unload and loaded the dishwasher, made myself lunch, and picked up some of the baby's toys that were all over the living room. It all left me breathless and tired. If I did much more, I won't have the energy to do the actual cooking. Then again, the cooking will completely wear me out in the end.

When it gets dark, I'll sit on the porch and see if the neighbors are going to set off fireworks despite the town banning them. It didn't stop anyone last year and with the big public displays canceled, I'm guessing things will be back like they were before the ban.

The 4th is a minor holiday for our family. And excuse to grill and have some beers. The only time it's ever been more than just a regular day was two years ago when my oldest showed up with three friends, not intending to stay (she wasn't living at home at the time) but I asked them if they wanted food. Meanwhile, the middle daughter had a couple friends over and next thing I knew, the house was full of teenagers. They helped clean up the yard and cook (the kids' friends, not my actual kids) and we had burgers with sauteed onions and mushrooms and bacon on fancy buns, hot dogs, fries and corn on the cob and macaroni & cheese and grilles zucchini and fruit salad and so much food there wasn't room at our extra-large picnic table. The only people not there were my husband (he was working) and my oldest son (who was having his first date with his girlfriend). It was fun and how I always imagined those summer holidays, but in the end I was so sore and tired, I barely made it through the fireworks because the kids all scattered leaving the mess for me to clean up (of course).

Still, that's nothing compared to what I put myself for Thanksgiving which is my holiday. I'm either in tears by 10am or drunk. Or both.

Someday I'll learn to not put so much pressure on myself. Today apparently isn't that day as I've already tried to clean the kitchen/living room several times and plan on making a lot of food for just the four (out of eight) family members that will be home. I'll go to bed in tears of pain and exhaustion, regretting everything and insisting I won't do this ever again, but next holiday, I'll start all over.

What's that definition of insanity again? ;) 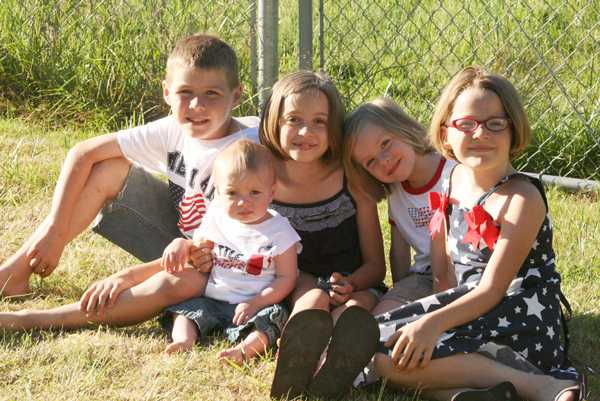