13:26: I had set my alarm clock for 07:00am... I just turned around shortly, and fell asleep... woke up at half and was a bit shocked. I only have half an hour to get ready. Usually that shouldn't really be a problem, but it felt so short. So instead of taking time to red the devotional and pray, i just read the verse of the day and prayed on the go. I was a bit lost, though. Later I noticed that I was wearing the T-shirt the wrong way... Was too late there. But this half an hour made me feel way better, less tired. Still I troubled eating properly. I had these milk-rice-pudding from Müller. Halfway I thought, maybe I should have chosen some pudding where i don't have to chew... All in all, I was just a few minutes late. Stefan was the most punctual, he was already there and then Christoph also came a few minutes later. We loaded the technical stuff into his car and departed. The set up there took a while. I really didn't think the meadow we were having our church service would be like that (not flat, some ... howewer it's called). We needed some things to put under the equipment so that it won't fall down the meadow when there was wind. They found a really good stone for the big thing where the speaker was on, i don't know exactly why, i just overheard that. Most of the time I was standing there because I didn't know what to do. I don't know what exactly has to be conected, how and where and with what. Okay, I have a slight idea. But I don't want to start and then it's wrong... soo i just watched and waited to get an order, looking if there is something i can do. I did a few things, and I'm happy about that.

Shortly before the beginning i heard that someone from the press/media (??) was there. I only saw her shortly. I thought she would stay longer to see how everything get's picked up again, but no. Soo, I was responsible for the recording. Stefan had put his laptop/device on a small chair thing in front of me. Still, everything seemed to fragile to me, I was a bit afraid it would fall down. It did not, just when I sat down I lost a bit of balance. At first I was confused, there were many tracks. And even though someone talked, i didn't see the line expanding. Then I noticed, the visible screen wasn't at the top. So I scrolled up and there it was. On the paper we got it said for the recording tracks, so i checked them, and found every one, so i suppose they all worked well. At least, they worked somehow. I just think the line for the last three should be a bit more exppanded, if that's really for everything or something, but i tought, if they do show something, everything is fine. We played nice songs, like some song "Immer mehr von dir, immer mehr, immer mehr sein wie du, immer mehr, immer mehr deine Worte verstehen, deine Werke tun, oh Herr, immer mehr" Or "Das privileg (zu sein)" or how it's called. And "Frei sein". The children song was one "Einfach Spitze" and I think I know that one from the other church, I wasn't there often when I was young, but I think we once sung that. But it seems that I'm the only one (maybe) who didn't receive the lyrics... Everyone else seemed to have a sheet of paper. I only got the one for the ones doing something like technical stuff. But I somehow got through, i knew the songs somehow, except this "Immer mehr" song, but before the session they practiced so i heard that one before and it wasn't that hard. At the end we played, and thay said it's a Segenslied - song of blessing - "I will follow". I didn't know it was one, and also I'm surprised we sung English. He said on the paper is the German translation... Hmm I think we have that song on a CD in German.... But I love to sing English as well, so no problem for me. Even though I am not secure if it comes to the lyrics, but i managed to get through. I've heard this song often before... Then we started to pick everything up. After the session, of course. This time I could just pick what I saw. Plugging out the cables and putting them together. How do the others put them together so neatly? They have beautiful circles.. And then theres me, where it looks like a mess and sometimes i need to try a few times until it's somehow good. But today it wen't way better than usual. I tried out the trick Christoph had showed me the very first day, when I had really no idea about anything. Back then I didn't see it, but I must say, the direction you use makes a different. This time - except one - they looked somewhat satisfying. Not as perfect as theirs, but okay. Then I put the microphone thing together and carried an orange box to the car. Man, that one was heavy. After some talk we departed again and put the things into church again. But I accidentally hid that things where the big speaker comes on against the wall😅🙊. This time i guess i took the other orange box. It was lighter than the box I carried before, so that's why i think that. But the speaker was even lighter. It doesn't look like that, but the box with cables is heavier than it looks and the speakers are lighter than they look. And that says the one who's too weak anyway... For technical service, I suppose I need to strenghten my muscles somehow😅 The main reason why I don't manage to do things like putting a microphone stativ together or a note stand is not because i don't know how to do that (that as well, but i can at least think) - but that i am too weak to do what i think. To rotate what i need to rotate. They're just so tight. Then we also talked for a few minutes outside, as we met David again. Then I went home, and remembered to take the bible I ordered with me. It's a small one, but they said it contains useful things. A few days ago when my sister and I went shopping... wait, that was yesterady... i saw it outside when we left and put it into the kinderwagen as i don't really like seeing those things outside. But i forgot to pick it up on the way home. So I did that today :D

Mom had made pancakes for breakfast, so i ate one 😋 We talked a bit. She started to make the cheesecakes with "Rosinen" (rasins? Uhm those too-ripe grape things).

The second picture is when we arrived and had carried a few things to the spot and the cover photo is later when we were finished, but I didn't make a photo of everything.

21:25: Mom made cheescake with rasins, and I had a lot in my two pieces. Maximilian ate them all, I don't like them :/

There was a firework in ACNL/NH. And my hair is so nice and soft since i don't remember when, thanks to mom that she washed them :D

I really need to learn how to wash them properly...

Oh, and btw, the meadow there is actually for cows. I don't know in how much it was a joke, but I heard someone saying they negociated with them for us to use it wor a couple of hours 😂 Also, when we arrived it was so quiet we could hear the birds crying, like if an eagle is hunting or something, i don't know, but it was nice. At the end there were a lot of crows on a meadow a bit farther away.... (Did I say that already?) And it didn't rain :D

The weather was good, grey but not too cold, actually just right, at the beginning the sun also came a bit through. I saw a bit darker clouds here and there, but not directly above us. Next week it'll be probably sunny, they told us to bring some head covering with us.

00:27: I'm (nearly) ready for bed (how late again :/ ). But my plants are growing and one even shows little petals already :D it's red (or actually a lilac/deep pink kind of colour), ahh how beautiful :D :D :D 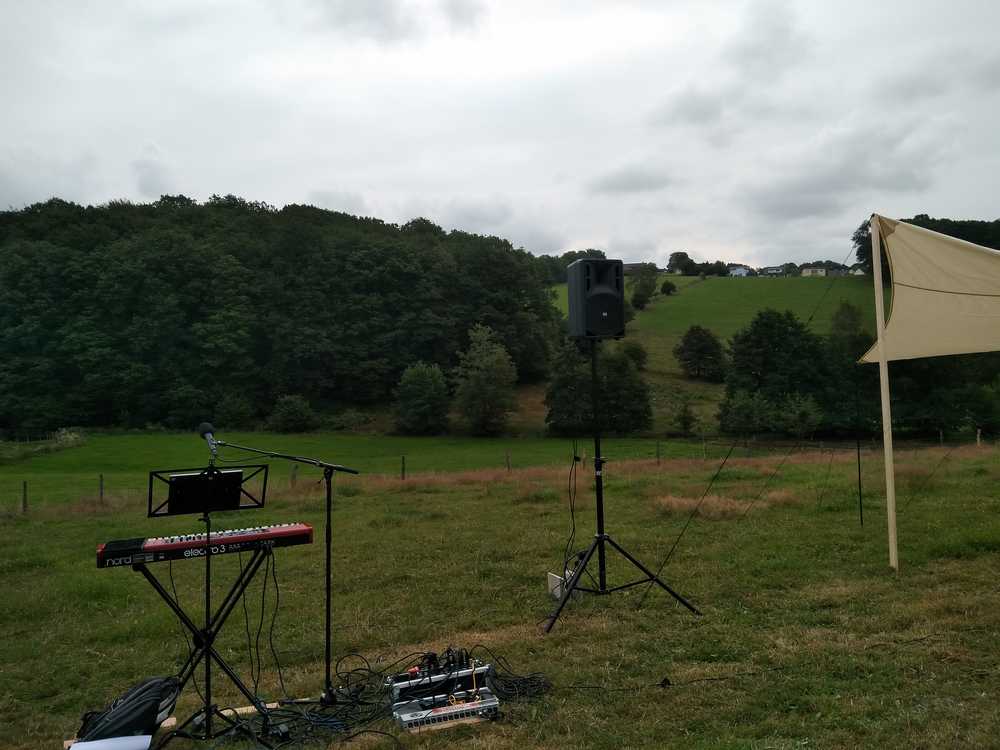 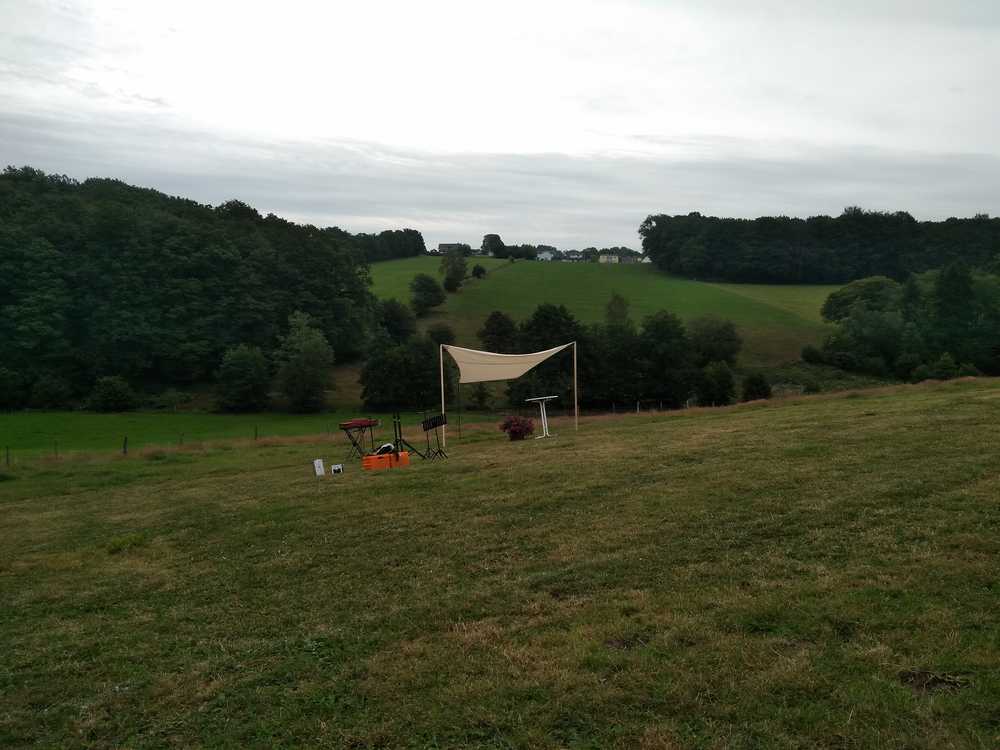 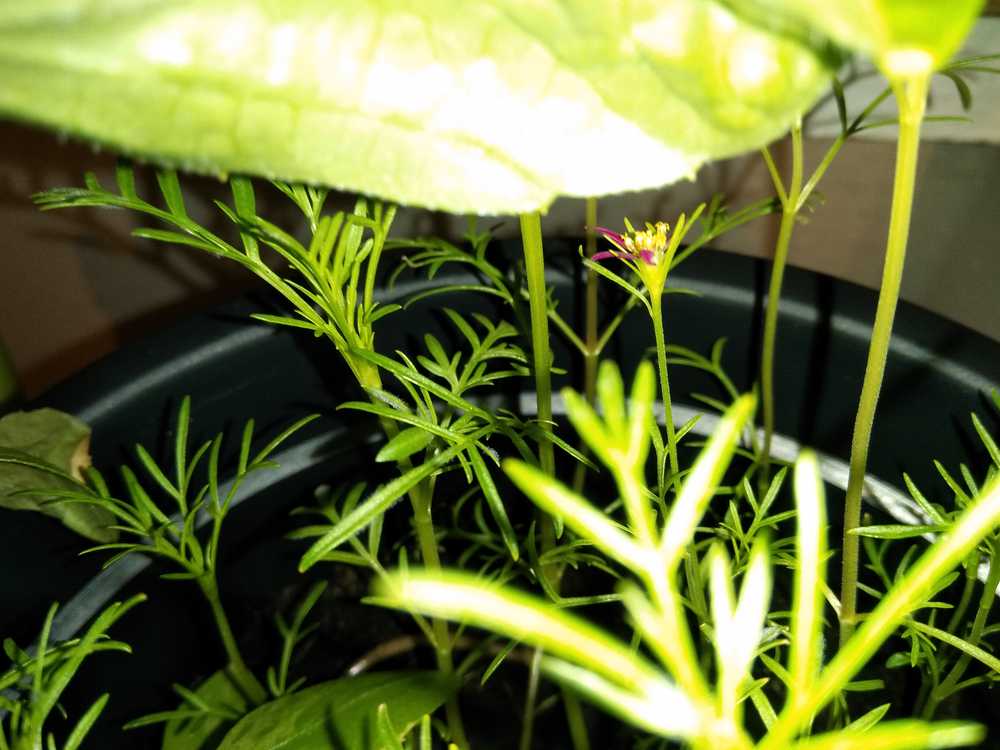