Last night was pretty bad. I have anxiety about sleeping in the same bed as another person, but had to last night because Glitch was having really bad anxiety about stuff that has been going on lately. It's because Jena is mad at them for some reason, but they haven't had a chance to talk. Glitch had to go home eventually today to take care of things.

I guess Jena isn't as mad at me anymore for leaving something in front of the microwave by accident because they let me have some of the dinner they made tonight- pasta with homemade alfredo sauce, which was really good. My stomach complained a little because I'm sort of lactose intolerant, but I ate an apple and then I was fine.

That was a whole big thing though where Jena was basically all in the group chat's throat because Glitch and I accidentally left some of the groceries in the way and my roommate who is disabled was understandably frustrated, but I still don't get why they couldn't just tell me to come move it... It was a really bullshit argument that didn't need to happen which was made worse by the fact that they have other issues going on which I don't fully know or understand, but still, I don't deserve all that shit dumped on me.

That said, I made sure to do the dishes tonight so that no one could bitch about it not getting done...

I'm glad that I was able to fall asleep last night. I was laying with my head on my stuffed animal, Mang, and that was soothing enough for me to fall asleep after a while. Glitch said that I snore in tiny. Little quiet snores from my little puggish nose. They took a picture of me sleeping and I actually really like how it turned out. I feel like it's a true picture of me in my natural state, just peacefully sleeping. I wish I felt like that all the time.

They'll be gone for the next few days and I'm going to miss them, but life continues to happen around us. I need to get back to my routines. I've still been able to get a little bit of a workout if ya know what I mean, but it will be nice to go back to regular as well. I will say it's quite an ego boost to hear from someone who sells sex that I'm apparently good at it. Now I know which muscles I need to work on more because I can feel it lol I guess I was also kind of surprised because it was all new to me as someone who is AFAB topping an AMAB person. I'd never done anything like that before, but I really liked it. Really gave me a sense of gender euphoria- feeling like I'm finally alright and basking in the glow of that feeling.

I tried to take some time to myself, as I will the next few days, to get back to working out and reading and such which I've been slacking on with Glitch around. I got back up to 4th place in duolingo at my current rank, which will go up to the next level soon. I got to the point where I'm starting to have random kanji thrown at me and having to memorize them is a bit difficult because it won't teach you how to write them properly or anything. I wish there was a little more focus on that because it's important in Japanese. Glitch had tried studying it before and I got them to redownload it and practice with me so we can help each other learn. I think there's a higher rate for completion if you go into something with a buddy like that.

Goodness... For our date last night I was all dressed up. I felt like a feminine doll, very pretty. The stuff I have doesn't fit as well as I remembered though... I guess I really did gain some weight. I really need to work on doing more work with my abs as well.... My waistline right now is terrible. I'm like skinny-fat... I know that's probably the disordered eating talking, but still. Not the shape I would like to be in quite yet, so I'll keep going so that maybe one day I can look good in those clothes again. Glitch was saying how surprised they were at how hot I am hahaha.... I'm always hiding everything under baggy, comfortable clothes. I don't feel like I'm attractive, partially because of my spinal issues and my teeth, but it's really nice to hear someone thinks that way about me. I know there are other people, but I mean people worth my time lmao

I think I might actually miss them sleeping beside me tonight, I've been putting off taking my meds.... but now it's time for me to take them and try to get some sleep so that I wake up in time for church tomorrow... 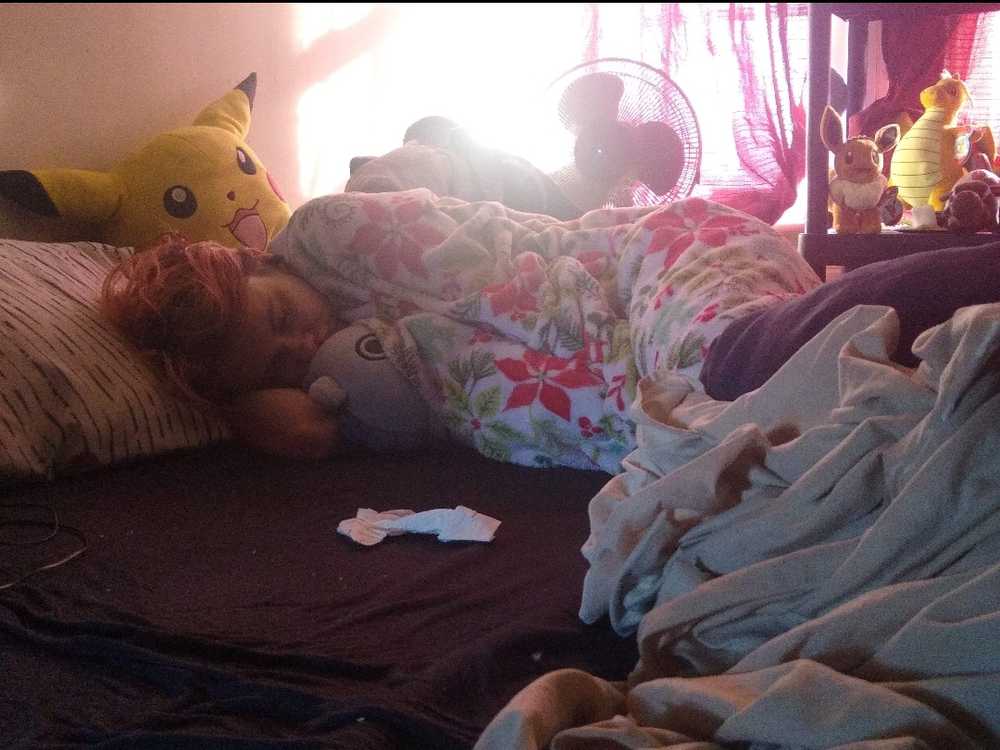