Today is Tuesday, March 23rd 2021 and it was a regular work day today, I worked from home as always.

Okay it's still Tuesday, March 23rd 2021 today, but it's been a few days that I'm writing this entry. Now I don't remember today that well anymore.

So I started off that it was a regular work day, I probably didn't get that much work done today, though I got a small amount done.

I probably also played Beat Saber for a few hours today. Since I'm playing on a hard concrete surface now instead of the wood surface on the second floor in the US, I can jump around and dance and stuff now. Previously I could not, because we had neighbors underneath, and me jumping around is going to cause a lot of banging overhead for them.

In the evening, I got quite bored and I ran out of jelly for my peanut butter and jelly sandwiches. So I decided to go to Wal-Mart to buy some, also I was contemplating getting a fan and maybe an air bed so I could sleep more comfortably. I ended up buying the jelly, and some bread, and regretfully a $7 pack of trail mix which contained 4500 calories roughly, which I ate half of the bag that night in a regretful manner.

I also looked all throughout the store just for anything else I felt like I needed. I looked through the electronics, and it turns out they have basically everything that Best Buy has, just in a smaller selection and cheaper prices. Camcorders? I didn't know if Wal-Mart would have them, but Wal-Mart had them. Wal-Mart also has fitness trackers like the Fitbit, which I didn't know they had. They also had regular cameras too, cell phones obviously, and an entire laptop and desktop selection. For the cell phones, they were all turned off in the public display so I couldn't tell which phone was which, they also didn't have any labels and I had no idea if they were for sale.

So anyway, I ended up buying this King Sized air bed and a pump for it. The airbed itself was $25, and the pump was $12. I don't know why I bought the king size version. When I was buying an airbed, the image in my mind was just a small, one person bed, as long and wide as a sleeping bag so I can fit it in a small corner in my room. Well, king sized is enormous. It's freaking massive, but I had no idea.

I looked at the prices for each of the beds, and there were some smaller sized beds that were $30, but this king sized was $25 only because it was on sale. I was like, okay let's just get the king sized then. I didn't think it would actually be so massive. I thought, it's just an air bed, it shouldn't be that big right? Well, it's huge and takes up a lot of space. I like using my computer while lying down on the floor on my sleeping bag when I'm about to go to sleep, but I couldn't as well with this because the bed was elevated from the ground and it was awkward to use my laptop like this.

The main reason I regret it though is that I didn't get much sleep on this thing. I only got 3 hours roughly, and maybe that was because I slept in the living room or some other reason, but yeah I didn't get any extra sleep from it. I got more sleep from my sleeping bag in which I'd average over 5 hours at least, so yeah. It is softer and more comfortable than sleeping on the floor for sure, but I dunno, I just didn't get that much sleep on it.

Also that night I installed Dead Island again and played it again. Last time I played it from my saved games was in 2013/2014, those were good times in my life, very reminiscent of those days. Back then the graphics for Dead Island were perfect in my opinion, I thought there wasn't going to be much improvement over graphics over the years. Well it's been 7-8 years since then, and I'm playing the game in max settings, and even though the graphics are still good, I can see now that today's new game graphics are even better.

I had a facebook Messenger video call with my parents too, and they watched me set up the bed, pumping up and down for a long time and getting exhausted.

So anyway that was my day today. Not much really happened. 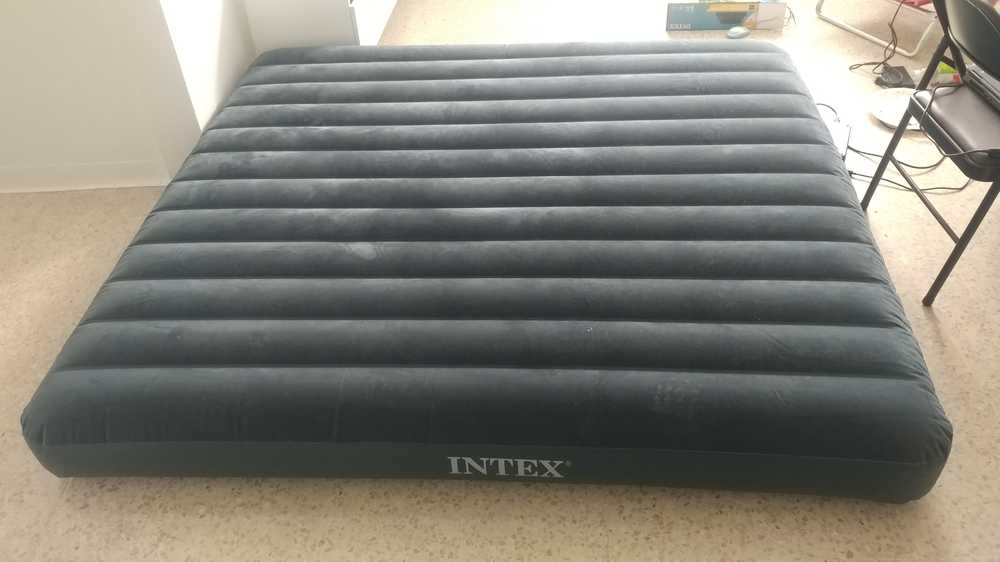