How to keep going after failure? Understanding the never-ending process of success.

I write a lot about success, so what.

I'm a bit obsessed with it, every question like what is it (for each of us), what you need to get it, how to get it (and whom you have to become to get it), how you'll feel when getting it and what's the next thing after that.

But today, we will focus on that one characteristic of every success.

The word by itself feels like a sting, hurting us with accurate evilness, like inverse acupuncture of some sort.

But believe it or not, this is the real mark of every successful people. Sounds like a cliche, I know, but it is true nevertheless.

A few days ago I was talking with co-workers, we are basically phone sales agents and we were teasing the top seller in the account saying that is not possible the number of sales he gets. But we came to realize is the perfect metaphor for success.

We see every day, and almost every hour, the updated data of the sales of the team and how this guy just keeps going and going and going until he ends up with 15 sales every day (which is a lot for an average of 8 sales for most).

And like with many things, we just see the results, we envy those results as they are not ours and, moreover, as they seem impossible for us. We actually believe there is a trick or something fishy about those outrageous numbers, but we never come to think about the effort behind them.

When we sit and hear the calls of our guy, we are surprised at the number of calls where people shout at him, reject him, or just hang upon him. More than that, we are so impressed by his resilience of hanging up that call and 15 seconds later taking the next one as nothing happened, over and over again.

Failure is part, some would say the dominant and everlasting part, of this never-ending process towards success.

The average person founds him/her self in the face of failure, maybe they were starting a new exercise routine, being with a new partner, starting up a business or anything new, and at the first shot of resistance we tend to give up and give in to the excuses that we tell ourselves.

We are programmed to run from failure, but we must understand that the opposite instinct is needed to achieve success, we need to run towards failure.

"Putting yourself out there" is not just an expression from annoying friends. "Just do it" is not just a catchy slogan. "Go now and try again", is the key to success.

This will be a short one, I just wanted to encourage you to do what you are meant to do... Over and Over again. Trust the process. 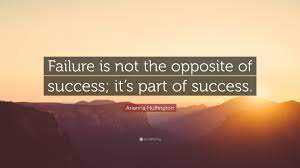